Music Reviews: Tyrannosaurus Grace - "Much More Than A Story" 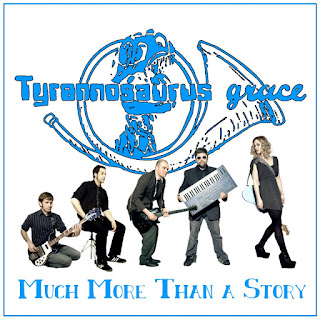 One of the perks of having your this blog is that people get in touch with you asking for me to check out their band. And some times I find a great band in the process. And Tyrannosaurus Grace is at the top of this list. I'm glad they got in touch with me, or I never would have heard their latest album, "Much More Than A Story".

TGrace are not a punk band, a metal band or even a Top 40 pop band. They are a ROCK band who play a powerful blend of power pop and hard edged rock. If record companies and radio cared about real rock music, this band would have been signed by now. One listen to "Trust Me" and you'll hear why I say that. The band has a definite Sugar era Bob Mould feel to em. Lots of catchy guitar noodling intertwined with vocalist/guitarist Tim Held's Mould like vocals make this an easy listen and an even easier liking.

The 11 songs on this release range from instrumental ("Overature"), to hard driving rock ("Pie") and even duet style rockers ("Ashamed"). This album has it all. "Crutch" could have easily been snuggled between any 2 tracks on Sugar's "Copper Blue" album. But even with the Bob Mould sound on certain tracks this is a band with their own flavor and style. The hooks and big choruses run rampant all over this album. And the hard driving beat is undeniable. This is a band that's serious about playing and writing music to the best of their ability. And this is packed with some great music. The production is top notch as well. The sound is layered perfectly is not muddy or lacking in the clarity department. Damn near perfect, actually.

The band, Held, guitarist/keyboardist Justin Foss, vocalist/guitarist/keyboardist Lakyn Bury, Bassist Jeff Gerrer and drummer David Hoffman are a tight group with great chemistry. The band has only been around since 2009, but they play well together. Each member is obviously competent in the way they approach their instrument. And it really shows. Held is a powerful singer who brings emotion and sincerity into his songs. And Bury is a wonderful counterpart when she either duets with Held or sings lead on "Monster". She a gifted singer as well as a guitarist in her own right. This band just gels together and brings out the very best in each other.

This is one of the great power pop albums that have come out in recent years. Front to back, it's got a little something for everyone who loves good music. I hope TGrace make their way to Chicago at some point in the near future so I can see them in action. Show some love and check out "Much More Than A Story" and hear for yourself what the buzz is all about.

Posted by Critical Mass at 8:18 AM