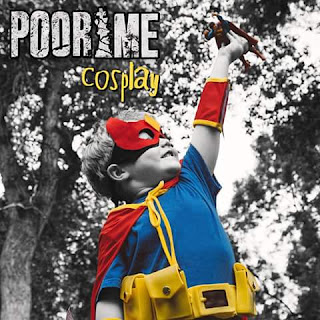 With so much crummy music being stuffed down the throats of the general public in recent memory, it's really hard to imagine a time when REAL music was being created in bedrooms, basements and garages. So when I see a young band with some actual potential, I get all giddy inside. And that's exactly how I feel when I hear POOR ME, who just released their second album "Cosplay".

Hailing from Denver, CO, POOR ME are giving a much needed kick in the ass to the same old same old we've come to expect from new bands on the scene. Gone are your typical Blitzkrieg Bop rip offs and your Green Day wanna be's. In its place there is an album that showcases a band ready to make you stand up and take notice with frantic rhythm and monsterous riffs that make this listener wanna tear shit up. Songs like "Clean My Head" and "Smash It Out" make me glad I'm still in love with our scene. And it's refreshing to see a new generation of punks that GET IT!

At the end of the day great bands are are not manufactured, pre packaged and sold to the highest bidder. They're working at their craft, fine tuning it and making a difference in the way we hear music. And POOR ME are well on their way to being one HELL of a great band!