Interview With Marissa D.N.A. From The Sore Subjects 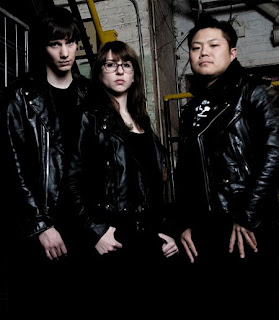 CM: Thanks for taking the time to talk with Critical Mass. Can you give us a little history on how the Sore Subjects came to be?

Marissa: Well, Joey & I met at a dive bar here in Chicago on punk rock night.  We got drunk and came up with an ingenious plan to start a Ramones cover band tentatively called the Kosher Salamis.  It never happened but a year later Sore Subjects did.  We originally settled to be a two piece with a drum machine ‘cuz drummers are hard to find but as luck would have it we met Charlie shortly thereafter.  I don’t remember where we found him, he is of a mysterious origin.

CM: You have a self released/self titled 7" out now. Is this your only release so far?

Marissa: Yeah, it’s our one and only record as of right now but we also have a previously unreleased song on the Cancer is a Punk compilation album just released on Swamp Cabbage Records this month.  Its available on pink vinyl and CD and all proceeds go to the fight against breast cancer so it gives you the warm fuzzies on the inside.
CM: And are there any plans for a full length release this year?

Marissa: Never say never, but probably not.  We’re going back to the studio in the next few weeks to record a couple of tracks for an upcoming split and possibly another 7”.  We do have songs that we’re saving for a full length release but the year is half over and we’ve got a lot of Netflix DVDs to catch up on, so I don’t think we’re gonna make it in time.

CM: What are some of the bands musical influences?

Marissa: We really dig Head from Seattle, they’ve got a minimalistic sound but really clever lyrics. Also, The Spits. Someone actually said recently that we sounded like the “Lady” Spits. It was a nice complement although I bet the guys would rather not be called ladies. And it goes without saying, the Ramones, duh!

CM: Has the band played outside of the Chicago area yet? Any plans for a possible tour in the coming months?

Marissa: We just played our first out of town show this summer in Indianapolis. We plan on doing more weekend trips around the Midwest but a full-fledged tour might be a bit presumptuous at the moment. We’d like to but only if we can do it the right way....meaning letting some other band do all the booking and following them around...and using their gear!

CM: The bands got a show coming up with Sloppy Seconds in August. Are there gonna be anymore shows with B.A. and the boys? Or is this a one off gig?

Marissa: Man, we hope there’s more!  But as of now there’s only the one on the books.  I’ve been a big fan of Sloppy Seconds for a long time so I was a little nervous about doing a show with them, ya know, the whole your heroes are assholes thing.   As dorky as it sounds, I’ve actually got Sloppy Seconds autographs hanging up in my room.  But B.A. has been really helpful and enthusiastic and I kinda of hope we become BFFs.
CM: The bands played with some pretty cool bands in the past like Dear Landord, The Neutron Bombs and Cobra Skulls. Who are your favorite bands to play with?

Marissa: Anyone who can bring people!  Haha but seriously though.

CM: With 2011 more than half over what does the band have planned for the rest of the year? Any big gigs that you can confirm?

Marissa: No but I can give you a list of big gigs that we are unconfirmed for: Guns N’ Roses, Jefferson Starship & we’re still waiting to hear back from Michael Jackson’s people about that “This Is It” tour.


CM: Is there a website where people can get news on upcoming shows, releases and merch?

Marissa: But of course!  SoreSubjects.com for news, shows & merch, Facebook for passing fancies & mundane conversation, or Twitter to find out what we just ate for lunch.

CM: Thanks again for talking with Critical Mass. I hope to hear more from the Sore Subjects in the coming months. Thanks again.

Marissa: Thanks!  We hope you hear more from us in the coming months too!
Posted by Critical Mass at 6:09 AM