Interview With Traci Trouble From The Wanton Looks 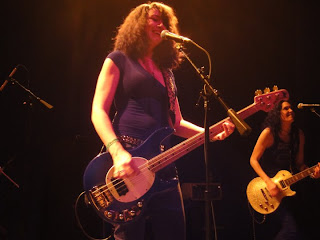 Critical Mass: Thanks for taking the time to talk with Critical Mass, Traci. Can you give me a little history on The Wanton Looks? How did the band get started?

Traci Trouble: Meg (drums) and I met each other through our previous bands Paper Bullets & Reptoids. We loved watching each other play and decided to give it a go together. This involved sharing a bottle of vodka and jamming for at least 4 hours at a time. Ahhhh the old days. No shows to play just boozing and songwriting. Anyway, we had a silly dream to put together a 4 piece all female rock band and placed some ads on criagslist which was pretty discouraging at times. The auditions ranged from girls who couldn't play whatsoever to an older transvestite. We had a rhythm guitarist for a while named Mindy who ended up moving to Seattle and we were back where we started. I met Inga through my bandmate Adam in HotLips Messiah at the gay pride parade years ago. We goofed around musically here and there but she was in hot demand playing cello, in music school and didn't have time for another project. Then the universe intervened and she stopped playing with one of her groups. I used to see her play guitar in her old band The Closet Squatters and knew she'd be a perfect fit. Meg agreed! Inga recorded our demo just before she graduated and then the search was on for a rhythm guitarist. This meant more weirdos and more girls who were less than adequate. Finally, Susie Q, new to Chicago from Arkansas, found her way to us through craigslist and we were complete.

CM: According to the bands Facebook page, you're an unsigned act! How is that possible? The band has major chops! Besides the 3 songs you have up on Facebook, has the band released any EP's or albums?
TT: Thank you! We don't know how we have been floating under the radar thus far but we foresee that changing big time. Our demo was picked by Greg Kot as the #4 best local release the year before last. We are finishing our debut album which we have been working on for the last year. A lot of blood, sweat, and tears have gone into making this record. We are happy to speak with any labels out there that are interested in helping us distribute our rock to the masses. Please email wantonlooks@gmail.com

CM: Has the band been approached by any local labels recently? I honestly can't see you being unsigned for long.
TT: We have been contacted by a few small labels within the last year that had expressed interest but nothing has come to fruition and we would rather be selective and pick the best fit or just release the music ourselves.

CM: Are there any plans for a release in the coming months?
TT: Yes! Our debut album :) TBD

CM: What are some of the bands musical influences?
TT: The Pixies, The Ramones, Elvis. Bikini Kill, Hole, Dolly Pardon, & Roky Erickson to name a a few.

CM: When it comes to songwriting, is it a group effort? Or is there a primary songwriter in the group?
TT: I have always brought bass lines and vocals to the table first or created a song by jamming with Meg, then everyone else would contribute. We plan on making it more of a group effort in the future. 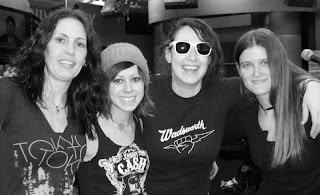 CM: Does the band gig outside of the state? Or are you strictly Chicago based at the moment?
TT: We have played in Wisconsin a few times but we plan on going out of town as much as possible when the album is released.

CM: Is there a website you wanna plug where people can get more info on upcoming releases and shows?
TT: We own www.wantonlooks.com but it's currently under construction so people please check us out on ReverbNation and join our mailing list and our street team.
CM: Thanks again for talking with Critical Mass. I wanna wish you and the band the best of luck. I hope to see the band live and hear more music in the near future. Thanks again, Traci.
TT: Thank you Chris and Critical Mass for helping us get the word out there! Our next gig is Friday July 22nd at Live Wire on Milwaukee Ave. just north of Belmont with The Neutron Bombs and Red Denizen! Stop by and introduce yourself :)
Posted by Critical Mass at 9:32 AM