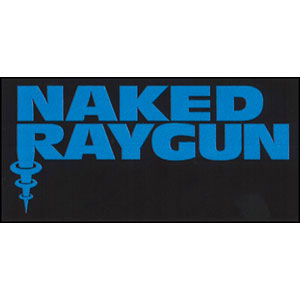 And on to our second part of my exclusive interview with Naked Raygun. In this installment the band talks about Free Shit, Canada, vinyl records and much more.

Critical Mass: You guy's released a series of 7"s, since you guys have been back, over the course of a year and a half now. Are we gonna get a new record? Like a full length? or maybe take those 6 songs, add some new songs to make a full length?

Jeff Pezzati: There you go. That's what we're doing.

CM: It's been a long time coming, I tell ya. I mean we really haven't had a decent follow up to "Raygun...Naked Raygun".

Bill Stephens: Originally it was to keep a steady stream of downloads always available to keep popping up. But for some reason we seem to have gotten into this vinyl thing. So I think we're concentrating on a medium that no one has the technology to play anymore. And when we get enough of THAT, we'll release it (on another format).

JP: And I think people excuse us because they say "they're old guys."

BS: They think "well, they're old now, they may not know there's anything other than vinyl."

PK: "They're doing the only thing they know, which is vinyl."

JP: We're just not on CD. We have vinyl and a download.

BS: I think you can only get that one on vinyl.

Pete Mittler: We can change that in 10 minutes.

JP: What's the point? We're not getting any money for it.

PK: (To Jeff) How many iTunes checks have you cashed?

JP: Only from Touch And Go (Records). I just want to go on record as saying that Touch And Go is the only record label that ever gave me money AFTER the album came out. Ever!

CM: Caroline didn't give you anything?

PK: Well, we can thank Caroline, who was a subsidiary of Virgin (Records), who was owned by that billionaire guy (Richard) Branson. I just want him to make good, and send us a check now.

PM: He's long since retired by now. He snorted your profits a long time ago. 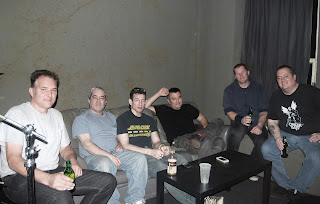 CM: Since the gap in time when you guy's officially took your leave of absence, and besides your one off shows at Metro and Beat Kitchen and getting back together, do you feel your audience has grown larger and stronger with, not only us old fans, but with a new generation of Raygun fans who maybe didn't get the chance to see you the first time around?

JP: Well, we're trying to get that going. But I wanna this as far as any secret shows coming up, we'll be using, for all secret shows from now on, (the name) Leo Slayer".

CM: So no more Negro Commando?

CM: Let’s talk about Free Shit! You guys have been tossing out "free shit" at your shows for years. How did this get started and do you remember the first "free shit" you threw into the crowd?

ES: It's Pierre. He started it!

PK: Well, the first "free shit" we ever threw out was dollar bills. We threw out a bunch of money. $40, so we give back.

JP: I announced that "people said we sold out, and we added it up and we did sell out...and we owe you forty bucks!" (re-enacts throwing the money into the crowd)

CM: And that's how it started?

ES: No, we had something else. I don't know what it was.

PK: Combs! Yeah, we had combs that said "Naked Raygun...get a haircut."

ES: And you used to say, "hey you want some free shit?"

PK: Yeah, and the crowd picked up on it and started yelling free shit.

CM: Jeff, last year you reunited with original Raygun members Santiago Durango and Camilo Gonzalez with Eric filling in for Jim Colao. What was it like playing with Santiago and Camilo again after so many years?

JP: Well, it was just like it used to be. Santiago had no sound for the whole first song, even though Sean McQue (sic?) went up there and got his guitar working, and amp working, and got it making sound, and had it in a stand in front of the speaker making sound...he went and grabbed a different guitar.

JP: For a whole song? (Laughter)

ES: I actually played that night (filling in for injured original drummer Jim Colao). I was the only one there nobody wanted to see. (Laughter)

CM: I saw the flyer for the shows 3 weeks after it went on sale, and it was sold out and I couldn't get in.

BS: So, if you have some type of Cancer benefit or something like that....FUCK YOU! (laughter) 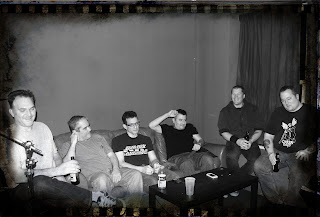 BS: Yeah, the guy who filmed it on his phone released it on YouTube.

JP: Riot Mike got a plaque for that. It said thanks for your donation. I got nothing. I didn't get any free drinks....

PM: But didn't Mike have something to do with that show?

PK: It's terrible that you do a free show and you don't even get a free beer or anything.

CM: Is the pre-Thanksgiving show the last show for this year? Or will you guy's be playing under that assumed name (Leo Slayer)?

BS: Why? What do you have going for New Years?

CM: Probably changing shit baby diapers. I have the new addition to the family coming.

BS: Put something out on cassette.

CM: I would buy that! All my old Raygun records were on cassette.

JP: Go out of town and tour...just not Canada. No offense. It's nothing personal. (After a story about the Canadian customs garage and Pierre in his underwear....GREAT story.) Imagine trudging over the Canadian Rockies, that are really big Rockies, that make our Rockies look puny. Coming down off the Rockies and seeing Calgary in the distance...large town in the middle of nowhere...pulling into Calgary, and pulling into the show...and who do you see begging for a show, begging to get on your bill...

JP: What are U.K. Subs doing in Calgary without a show?

PK: It was in 1980, I went to London (England) to see the U.K. Subs live. Five or six thousand people going up and down pogoing at one of their shows. And then, fucking less than 10 years later pulling up as a bar band, in Calgary, in a parking lot and having them beg to get on your bill, which already had 3 bands on it....for like fifty bucks!

CM: Thank again guys for agreeing to be interviewed for Critical Mass. I appreciate it greatly. And I'll be seeing you on Nov. 23 at the Metro!

And with that, I had 1 more beer and shared a few more stories with the guys in Naked Raygun. This was my first sit down interview, and I had a great time. The band I looked up to, and STILL look up to, the group I STILL consider hometown heroes were kind, generous, funny and welcoming to me and my crew who filmed this interview and took some of the pictures you've seen throughout the 2 parts of this interview (Christine and Tiffany, I can't thank you both enough for helping out and being so supportive). I again, want to thank the guy's in Naked Raygun, Jeff, Eric, Pierre, Bill and Pete for their generosity in allowing me and the CM crew to invade their practice space for this interview. I know most of my other sit downs may not be this cool...and that's why THIS one will go down as my personal favorite. Thanks Gentlemen. Be sure to check out the bands website and Facebook page for news on upcoming shows and releases.

All Photos by Tiffany Shewchuk