"My Personal Top 10" - Paul Downs from The Larroquettes 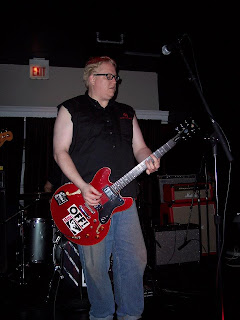 Chicago's own Paul Downs, lead singer and guitarist for The Larroquettes, give us his "Personal Top 10" favorite albums. Paul's a big fan of music in general, so you may be surprised at some of his picks. After you check out his Top 10, be sure to check out his band who's new album "Quartet Loser" is out now on Suicide By Suit Global Records. Also be sure to check out the bands official website for tour dates and merch or hit em up on Facebook.

Not in any order. They're all number one for me depending on which way the wind is blowing and if I'm in the correct mood or not.


BLUR - Leisure
On Saturday nights during my sophomore year of high school I would camp out in front of the TV and watch JBTV religiously. One night the video for BLURS "She's So High" came on. We didn't have cable and the TV we had, was old with one speaker and an antennae. I experiences a mono, lo-fi, fuzzy pictured version of it in all its spender. Something happened in my brain while viewing that video, as if I was put into a trance of some sort. My brain chemistry changed right then and there. The time was perfect for this to happen as I was just on the verge of dealing with my first major spell of depression, which landed me in a hospital for troubled teens for most of 1992. For a few months prior to the hospital experience, I discovered Britpop. Britpop in itself somehow fed my meloncollie teenage dispare and made it romantic and ok. It created a new and non threatening place for me to experience these new feelings. It made me comfortable with being melon-collie about shit like wanting a girlfriend and not feeling cool or handsome enough to land one. It made me feel ok to be alone and depressed in a non threatening manner. I didn't feel alone any longer with my britpop around me. God I sound like a pussy!
My Bloddy Valentine - Loveless
Kinda like the BLUR experience, I got my hands on this cassette in 1993. I would sit in my room and listen to this album over and over again. A guy I grew up with stopped being friends with me because I listened to this album ALL the time and wanted to play music like this. Fuzzed, large depth charges of sound that would challenge not only the human ear but the amplifiers blasting this shit out. I wanted to just fall into the pillowyness of the sound. I literally buried myself in this cassette. I didn't leave home for days on end as I sought comfort in this music. Fucking fantastic shit. This is when I really wanted to start playing music. I didn't get a job literally for years. I sat in my room and recorded shit tons of tripped out stuff on a Tascam 4-track recorder. 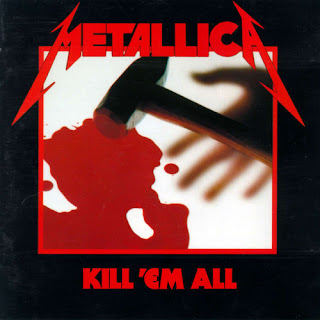 Metallica - Kill Em All
To me a true metal album. Bullet belts, denim vests, White Reeboks with the tongue hanging out, holey jeans, cigarettes, old style and fucking guitar solos. Not my first metal album but still pulls on my heart strings when it comes to identifying a true metal album of any sort. Its funny hearing Metallica talk about this album like it was some bad experience. I could only imagine that if all metal albums continued to be recorded just like this one, we wouldn't have any shitty metal albums out there at all. Though that is in the eye of the beholder. I learned how to play guitar to this album. Made me feel like a 100 bucks.
Venom - Black Metal
My first taste of anything declared as "Satanic" with metal. A high school friend of mine got it at a garage sale with no case or cover on cassette. Around this time a group of friends and me where talking about starting a band which would've been our first. I thought it would be cool to call the band Goat Head, purely inspired by the Venom cassette of course. Everyone was like "FUCK YEA!" to the idea, except for one friend, who freaked out, broke my Ouija Board in half and ran out of my room yelling at us, calling us "Satan dudes." What the fuck is a Satan dude? None the less, this album remains in my rotation as its one of the most balls out recordings of all time. Truly one of the most balls out bands of all time. Fuck going to 11! This shit goes to 15!
Ryan Adams - Rock'n'Roll
A friend of mine turned me onto Ryan Adams in 2004. It took me awhile but then this album came out. I used to think everything had to be like Venom to be rock'n'roll. Everything had to be extremely distorted and audibly rude to the fucking max to be rock'n'roll. Then I heard this CD and was reminded that song writing has a lot to do with it also! This is also around the time I truly started to listen to the Rolling Stones as well. This album however is a great all around rock'n'roll album, period. This album reminds me of winters in Chicago and living on Irving Park with friends of mine. Cigarettes, coffee, Chicago and Chicago rock'n'roll. The best part of all is the first night I hung out with my now fiance, she had this in the CD player of her car just about the time I was totally into this CD. 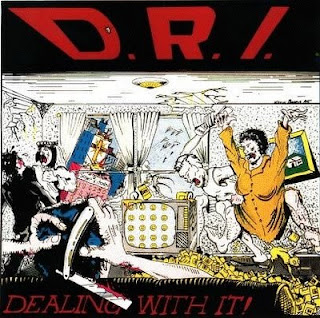 DRI - Dealing With It
I remember making 90 minute mix tapes of just 3 songs off this album and 2 specific Black Flag songs. Mad Man, Couch Slouch, and I'd Rather Be Sleeping mixed in with Nervous Breakdown and Wasted. Keith Morris area of course. I would listen to this tape over and over and over. DRI was my answer to all the stuck up metal jerk offs in high school. "Oh yea you're into Overkill? Check this shit out poser!" DRI blew everything else out of the fucking water for me.
Black Flag - The First Four Years
See DRI - Dealing With It. Again, my response to everyone else freshman year of high school. FUCK YOU!
Ozzy Osbourne - Blizzard Of Ozz
Somehow, someway, I received this cassette from my brother when I was 5 years old for Christmas. My brother is to blame for all this! Bless that man!
Van Halen - Van Halen I
My brother and sister are 10 and 11 years older than me and they baby sat a lot as my folks worked. I would tag along with them during the summer time with one of them and witness how teenagers in 1978 enjoyed their time. As you can imagine, it involved Frisbee at the forest preserve, beers, weed and the Loop cranking out Nugent, Van Halen, ZZ Top, etc. Being a guitar douche bag, I dug my heels into Van Halen. To this day, every time I hear Jamies Cryin or whatever song from that album, it makes me think of those times being there to witness first hand the "do bongs" generation. I look fondly upon those memories. 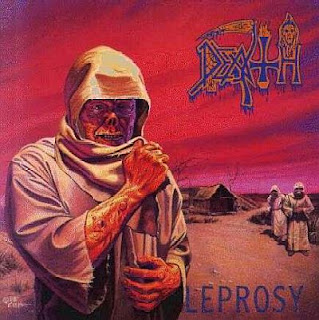 Death - Leprosy
In 1988 I asked for Death Angels, Frolic Through The Park, for Christmas because I was afraid to asked for Death Leprosy. I thought my mom would freak on the choice so I went with my number 2 option. By mistake, she bought me Death Leprosy instead. Because it had the word "Death" in the title, she thought it would be just as good and she couldn't find the Death Angel album. She had no idea I wanted Death Leprosy. It was in the stars. It was meant to be. DEATH TO FALSE METAL!
Paul
Posted by Critical Mass at 9:59 AM