Interview with After The Fact 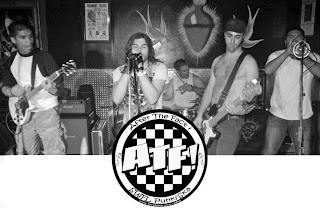 Critical Mass: Thanks for taking the time to talk with Critical Mass guys. For those new to After The Fact, can you give us some history on the band and how you got started? After The Fact: Hey man no problem! Thank you for taking the time to interview us and get to know a little bit about us! When we first started out Eric and Doug's old punk band, Code Zero, had just played their last show (circa 08) and I hadn't played in a band in almost a year (my last band before ATF! being Glory Daze) and was looking to start something new when Eric and Doug called me up about seeing if I wanted to come jam with them and do another punk band. I said hell yeah and we started jamming , we were based out of Doug's house up near downtown Fort Myers, we became a 3 piece and started writing songs.  Eric playing bass, Doug playing drums and myself playing rhythm and lead guitar.  After a little bit my best friend Allen Davies joined the band and played 2nd guitar and became our full time singer with Eric and myself doing back up vocals. After about a half of a year to a year later we had gone through numerous horn players and Allen had left the band to move to Nashville and pursue music production and business. It was then that we recruited our friend Casey Gartland of the band EVAK to sing for us, this was around winter of 09. It was  about that same time another friends of ours, Paul Kalugdan of Withstand The Fire, joined the band playing guitar/trumpet and singing vocal harmonies finally completing and solidifying our lineup. Our sound has changed over the years from harder old school punk with extremely dirty vocals and grungy sounding guitar and bass to a melodic pop punk/ska sound I think we are very happy with now, being more vocally driven than we had initially anticipated and working more and more to strengthen our weaknesses as a band (both instrumentally and professionally between each other) while keeping it fun and focusing primarily on our strengths and most importantly having fun with all of our friends always and making our show a good time for all, no matter what age.CM:Your newest release, "Super Scary Scenarios" came out last year, and I really enjoyed it. You guys have a great sound and the energy really comes out in the songs. Are there any plans on releasing new material this year? ATF: Thank you! I'm glad you enjoyed it! We are in the process right now of finishing up about 10 new demos with the help of our friend Rick of another local band(Ghost Dog Ela) that we will be sending off to Roger Lima from Less Than Jake/Moathouse Recording Studio up in Gainesville, FL and will hopefully start tracking everything sometime in April or May for what we intend (in time) to hopefully be our first full length, released later in the year with an EP of fun new demos sometime in the early summer to tide everyone over until the completion of the album. 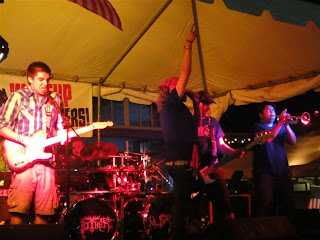 CM: I can hear certain styles and sounds in the bands approach to playing music. Who are some of the bands musical influences?
ATF: All the members of ATF! have a varied Music Back ground everything from Metal,Hardcore,Too Indie and Punk,and Lots things in between.


As a band Id say our musical influence are definitely Less Than Jake, Jeffries Fan Club, Goldfinger, The Hippos, Dynamite Boy, Slick Shoes, Face to Face, Pulley, Lint, Gameface, Screeching Weasel and ALL.and even a little bit of the really poppy stuff like New Found Glory,and Blink 182.
CM: When it comes to the whole songwriting process is it a group effort or is there a primary songwriter?
ATF: Well since the beginning Eric and I write the majority of the lyrics and each of us have music and structures thought up for our own songs and then we bring them to the band and then after we get the structure down and tweak that we add in the dynamics and everyone adds their own take on their part into the song and develops their own part off the basis of the song structure and it becomes a song.  Just lately though Paul has started bringing some songs he's written in and so has Doug (although previously Doug wrote "Maravilla")
At this point Casey comes in and puts his finishing touch on things, makes the vocals shine and bam another hit song done! 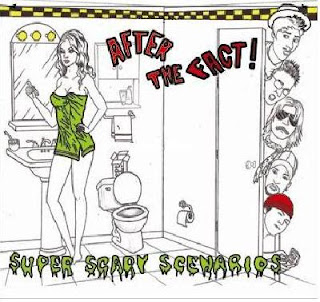 CM: Does the band play out a lot outside of your hometown of Fort Myers, FL? Or have you stayed somewhat local up til now?ATF: We try to get outta town as much as possible because we have friends all over the state of Florida and its really good to get to see everyone! We all work alot though so alot of the time we play local shows and bring lots of bands thru here especially touring bands thru our home venue, Rack'em Billiards in Cape Coral, FL or Cool Hand Luc's in Fort Myers,FL and sometimes for Music Walk too behind our friend Andy Howl's Howl Gallery/Tattoo in downtown Fort Myers,FL. We are always about making sure the outta town bands get taken care of first and always make sure everyone has a blast! CM: Are there any plans on hitting the road for some shows this year? Maybe a tour of the Midwest of the East Coast?ATF: We would love to be able to get out of town more or even go on tour this summer but money is really what's holding us back from doing that right now. We will definitely try to make it out of the  the state though by the end of this year and hopefully if not this year then definitely next year we will do an East Coast/Mid west tour for sure! Right now we try and take 3 day "MinoTours" (a pun on Mini-Tour and Minotaur's TASTE THE BEAST campaign from Role Models lol) around the state of FL usually to Fort Lauderdale, Orlando, St.Pete/Tampa and back or the opposite way around. We wanna get into Gainesville and Orlando more and definitely up to Tallahassee  too but we've been so busy bringing bands down thru here, playing festivals and recording we haven't had time to get back up there yet. But worry not! We will make it back up there definitely by summer! 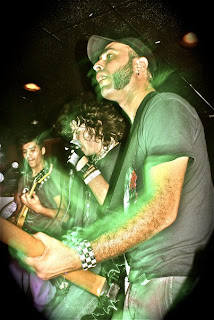 CM: Eric, you were telling me that you guys heard Roger from Less Than Jake really liked your album, and if all goes well maybe he'll work with you guys on the new record. That's actually pretty awesome! Can you elaborate on that? Or is it too soon?ATF: At first we got our Album to Chris (LTJ) and he liked it and thought we really sounded like we knew what we were going for. So that kind of made it easier too approach Roger. After he heard our new demos  he said that he could make sure everything sounded sonically pleasing and capture the energy of our live show while still making a radio quality recording which is definitely what we wanna do! We are just waiting now to get the rest of these demos done which will be done by the end of the month and shipped off to Roger.
CM: Do you think there maybe a Less Than Jake/After The Fact tour in the near future? ATF: Well I'd always hope for something like that. But I doubt it cause we still have a long way to go. We still need to get our merch together (t-shirts and what not) and probably a van that can tow our trailer and then save up some money before we can even attempt that. But playing with them on March 17th at the Durty Nelly's Block Party in Downtown St.Pete with A Wilhelm Scream and alot of our friends in other bands like Askultura, Escape Tonight, Trust for Liars and Burning Tree is definitely a start! CM: How can fans get in touch with the band? Is there a website you guys wanna plug?ATF: Eric and I primarily run the Facebook page with Casey and Paul sometimes adding in their two cents. And for a more professional layout of upcoming shows, songs and reviews you can go to www.reverbnation.com/afterthefact 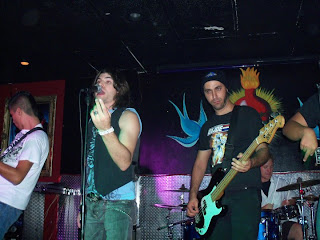 CM: Thanks again for taking the time to talk with Critical Mass. I really dig what you're doing and I wanna wish you the best of luck in 2012! I'm stoked to hear some new material in the coming months! Thanks again guys!ATF: Thank you so much for taking the time to talk to us and thank you for the kind words! We just love having a good time with all of our friends and making meaningful music that you can dance/mosh/skank to! Take care and thanks again!

Posted by Critical Mass at 9:31 AM