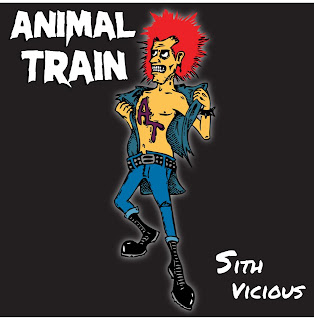 Animal Train have been around for some time now releasing a quite a few albums, EP's, 7" singles and comp tracks along the way. The bands style is very much in your face and aggressive. It's Austin style punk rock in the highest order. And now AT is back with it's latest release, the "Sith Vicious" 7".

The band is at it again hitting you between the eyes with short, fast blasts of music. They're relentless in their style and sound, but also very proficient in their ability to play and write music. And if you have a short attention spam like myself, this is the best style of music for you. Hit it and quit it...boom boom boom, and out the door! But don't let that hit and run style fool ya. This is a band that CAN play.

"Thin Thread" just jumps right out at you with fierce singing by CJ. She's letting it be known she's nobody's fool, and she'll play the game by her own rules! And fuck you if you don't like it! I LIKE that kinda attitude! The title track is just as powerful, but in a different way. It's more melodic with a sing along style that's very reminiscent of late 70's New York punk. you can hear the influence in the songs. But Animal Train is it's own entity. They're playing the kind of music they love and doing it their own way on their own terms. And isn't that what punk rock is all about?