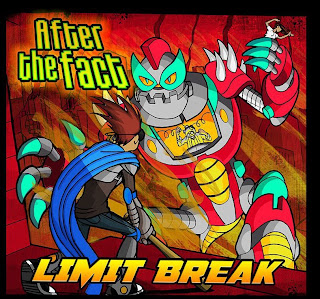 After a short break and some line-up changes, Ft. Myers, FL ska band After The Fact are back with their most ambitious album to date, "Limit Break". The album features 9 tracks of skank inducing awesomeness that will get you on your feet and slamming and singing along within seconds!

The album kicks off with "Sick As A Dog", with it's mellow groove and softy horns before picking up the beat and setting the tone for the rest of the album. This is a tight track with a great chorus about missing your significant other. We can all relate to that, right? I gotta tell ya though, missing someone has never been this much fun!

"Take A Hint" is another big sing along with lots of energy. But it also has a loving feel to it. The guy in the song is stuck on his girl and wants her to know he'll "never ever walk away" from her. The band gel really well together on "Limit Break". Not that they weren't a good band before. But time has been very kind to this band of fun loving goofs. The songs are more mature, but not in a "old timer" way. These guys can still have fun and grow as a unit and write songs from the heart without going sappy. Pretty awesome!
The band, Tim Tim (Guitar/Vocals), Big E (Bass/Vocals), Paul Kalugdan (Trumpet/Guitar/Vocals), (Jason Melcher (Drums/Vocals), Bruce Stokes (Trumpet) and Mike Requena (Trombone), have truly made the album of their career with "Limit Break". Solid playing, top notch songwriting and great production have manifested itself in an album that will stand the test of time and sound just as fresh and exciting 20 years from now, as it does today! I can't say enough good about After The Fact. This band has found it's footing in the music world and I can't wait to see how the band evolves with time. Gentlemen, you really made a fantatstic album! Congratulations!
5 / 5 stars
Posted by Critical Mass at 10:52 AM