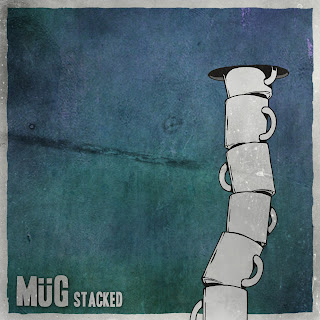 Mug are a talented band from Enfield, England who's latest album "Stacked" is 12 songs filled with big chords, major sing-along choruses and and lots of heart.

The albums opener "Repeaters" starts out kinda mellow and laid back...but quickly changes direction with rolling drums, thundering bass runs and a mean guitar tone that'll get you up and moving in seconds. Add to that lots of "Whoa oh oh" singing, and you have a monster of a lead off track. Brilliant!

"Riot" is another solid track with it's bass riff with guitar kicking in at just the right times. It's a great tune about citizens rioting in the streets who are "smashing in windows, burning down factories" while playing "pirate'"! From the sound of this tune and the angst lead singer Mat has, I get the feeling these guys may have partaken in the festivities as opposed to just singing about it.

Along with Mat, the band, guitarist Mark, bassist Mikey and drummer Mike play like their lives depend on it. These guys have the chops as players and songwriters to bring the house down when they play. Song like "Le Clench" and "United Kindness" prove that with the power, passion and intensity of a band possessed. You can tell this band believes in what they write about and are not just going through the motions. And that is what's gonna set Mug apart from others.

"Bottled Up" closes out this album with activist style folk acoustics and somber lyrics that remind me of the best Against Me! songs. But make no mistake, this band is it's own entity. With so much rocking on the first 11 tracks, it's a nice way to end the album. It shows range and promise. I am pleasantly surprised at how well this album comes together and holds you until the final strum of the guitar brings it all to an end. I am excited to see what Mug will do next. All in all this is the best album I've heard so far this year.