Interview With Luke McNeill From The Copyrights 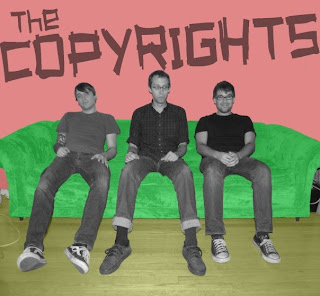 Critical Mass: Thanks for taking the time to talk with Critical Mass, Luke. The new Copyrights album is set to be released in August. This will be the bands first full length in 3 years. Why so long of a wait?

Luke McNeill: It was sorta planned to wait a while between records just because we felt like we were always rushed in some way or the other on past records and we wanted no time constraints with this one.  It kinda got out of hand though and each step took forever.  We forgot how lazy we are.

CM: The bands last album, 2008's "Learn The Hard Way", was a really strong album. What can fans expect from the new album?

LM: Well, this new one is definitely our poppiest and weirdest album.  That's relative though of course.  It's still a punk rock album after all, kind of anyway.  It was produced by Matt Allison who did Make Sound and the Methadones split.  It's definitely our best sounding record in terms of production.  It's also my favorite in terms of lyrics/themes.

CM:  Can you give us a little history on the band. How did you guy's get together?

LM: Me and Adam have been playing together since we were 15 years old.  We decided to start a heavily Screeching Weasel-influenced band at first, then we've tried to at least put our own influences and spin on the tried-and-true formula of melodic punk rock.
CM: What are your personal musical influences? And do those influences show up in your songwriting and playing?

LM: I like tons of stuff, and I'm sure I rip off everyone I like equally.  I'm a big fan of 90's alt-country like Uncle Tupelo, Son Volt, Wilco, Whiskeytown, old-people stuff like that.  I'm also pretty into hip-hop lately, at least the Wu-Tang family and East Coast stuff.  As far as contemporary punk rock bands I still really love Dillinger Four obviously. The Dopamines, Dear Landlord, House Boat, and Iron Chic are all great but everybody knows that.  I'm pretty obsessed with Fucked Up too.

CM: The band has been a non stop touring machine for the last few years. Are there plans for more European dates as well as state side dates for this album?

LM: I think we're actually planning on touring Europe next year again.  This year, we're gonna do the West Coast in early September, and then do the eastern U.S. in late September/October.

CM: Some fans may not know that you're also a producer and engineer in your own right, having worked at Sonic Iguana Studios. Can you name some bands and albums you've worked on through out your career?

LM: The only band I've produced besides my own in the past 5 years or so has been House Boat.  They're all my friends and it's a blast getting together with them every once in a while to do a record.  Back when I worked there full-time, I worked on records by Riverdales, Groovie Ghoulies, Common Rider, Squirtgun, Lillingtons, Teen Idols, Beatnik Termites, and a bunch of other ones.  It was really fun and Mass taught me a ton of shit about producing and engineering both.

CM: Do you find it just as enjoyable working on other peoples albums as it is working on a Copyrights album?

LM: Hmm, I think it's more fun working on our albums just because they're my songs and I'm more "emotionally attached" or whatever.  But it's also a ton more stressful and you second-guess every possible thing.  For the House Boat records, I don't even care if the tracks get recorded.  I think there's a song on their new record that doesn't have a lead vocal.  Whatever, people won't even notice.

CM: Up to this point The Copyrights have released a vinyl version of all your past albums. Will the new album be released on vinyl as well?

LM: Yeah we were really adamant about vinyl being released the same time as the digital formats.  Adam Alive is taking care of the vinyl on the new record so we're not worried, it'll be out when the digital comes out.

CM: With the new album coming are there any big festivals that you guy's have signed on for that you can confirm?

LM: We're doing the usual Insubordination Fest in Baltimore and The Fest 10 in Gainesville.  I think we're also doing Red Oktoberfest in Chicago in October.

CM: Is there a website you would like to plug? Where fans can get news updates, tour dates and merch?