Interview with Nicky Rivets from The Hairlips 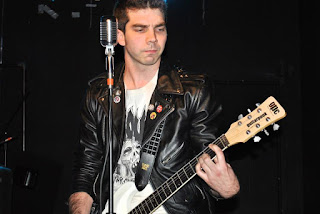 Critical Mass: Thanks for taking the time to talk with Critical Mass Nicky. I really appreciate it. For anyone new to The Hairlips, can you give us a little history on the band and how you guys got started?

Nicky Rivets: Well, I'll give you the Nicky Rivets history of the Hairlips. One day I got a call from Eric. He said i should cut my hair and i could be in his pop punk band. I was all about it cuz he's the guy who showed me the queers and screeching weasel. I was all like, cool. I was invited to Johnny's garage in July of 2010 to drink some beers and learn some new songs. First song i heard coming from the garage was a dirty version of Randy and Rainbows "Denise". Since then I was hooked on the whole idea of "The Hairlips". We kept playing and drinkin till we got ahold of Ronnie. The rest is a long history of debauchery.

CM: I reviewed your self titled album recently and think it's a great mix of pop punk and 50's doo wop. Is this the bands first album?

NR: Yeahhh. Its the first album we've recorded. But we got TONS of shit we haven't released yet.

CM: And plans on releasing new material in the coming year?

NR: YUP. Like I said. We got a lot of material waiting to show the world. 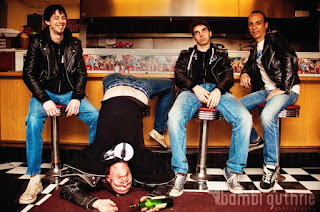 CM: The bands sound is so identifiable with bands like the Ramones and The Queers. But you also have such a great 50's vibe added to it that makes it your own style and sound. In your own words who are some of the bands musical influences?

NR: Well, I can only speak for myself. Everyone in the band has a wide range of musical taste. I like the classic pop punk shit like the queers and screeching weasel, Riverdales, Beatnik Termites, Teen Idols. blah blah blah. I had my metal stages growing up but my dad raised me on Motown and 60's soul.

CM: When it comes to songwriting is it a group effort or is there one primary songwriter in the band?

NR: Overall its a group effort. We all have songs that we bring up to each other during practice. Usually, we have a open forum for criticism. We present an idea and then the guys will offer suggestions. ITS SUPER EXCITING. 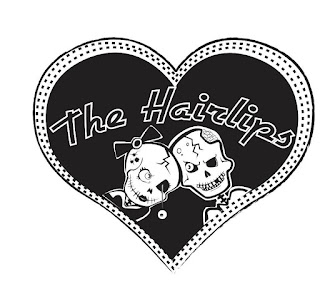 NR: I don't pick favorites. I just like playing out and meeting people. If you ever come to a Hairlips show come see me and I'll buy you a shot and we WILL party and have a good time!!!!!!

CM: Awesome! Are there any plans to tour outside of the Chicago area anytime soon? Maybe a possible mini tour of the Midwest?

NR: We would love to. But we all have bills to pay. As for right now our main priority is to write good music.

CM: Is there a website you guys wanna plug where we can get up to date news on new releases, gigs and merch?

NR: All we really have is a Facebook. I never post anything on it but its both dope AND tight.

CM: Thanks for talking with Critical Mass Nicky. The album is truly amazing. Surely one of the best of 2012. Can't wait to see the band live! Thanks again for your time man!