Interview with The Dead Tricks

Critical Mass: Thanks for taking the time to talk with Critical Mass gang. I really appreciate it. For anyone new to The Dead Tricks, can you give us a little history on the band and how toy got your start?

Jiv: Thanks for having us! NYC is a small place…to us. The Dead Tricks all came from separate paths that crossed randomly at just the right time. We converged in dank studio basements, dive bars and filthy hallways throughout NYC and found that we all share the same undying commitment to playing this music that we love…while sharing many of the same vices. Our connection was volatile and undeniable from the start; it continues to surprise us, snuffing out any chance of a dull moment.

CM: The bands most recent release "You Should Have Worried About It" is just a barn burning no bullshit record. Is this the bands first release?
Manya: Yes, and thank you! These songs are the building blocks that shaped TDT, they are the glue that brought us together as musicians and taught us how to work together. And apologies for any barns that were harmed as a result of this musical fire, but we can't promise it won't happen again... 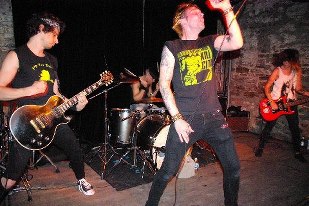 CM: The EP was produced by Mike Gallo from Agnostic Front. Being an old school AF fan myself, I would have been a bit star struck. What was it like working with Mike?

Lorne: I’m a big Agnostic Front fan, too. It was very meaningful to get the opportunity to work with Mike. The process felt really natural, Mike intuitively understood our music and our band dynamic. He was a pleasure to work with and he’s just really, really talented.

CM: I know the bands about ready to release a new single. What can you tell us about this single? How does it hold up to the EP?

Lorne: After recording that EP I remember walking around at dawn in a daze, sort of distraught, thinking I could never do anything better than that EP. But you can’t judge creativity that way. You just dig deep and move forward. That’s what we did with these new songs. Stepping back, I can say the musicianship is stronger, more unique, and we didn’t feel confined by any preconceived notions of the band or of what punk should be. We just did what was authentic, what moved us.

CM: Who are some of the bands musical influences? 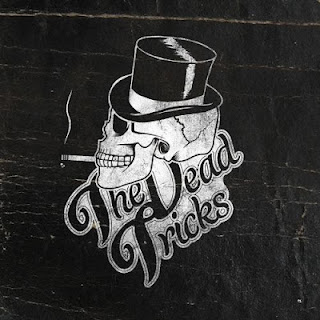 CM: When it comes to songwriting is it a group effort? Or is there a primary songwriter for the band?

Jiv: The songs at their root derive from me or Lorne, or a combination of both. We bring forth full songs, parts, pieces, etc. but no matter how much or little of a song is written, it always comes to life and takes on its true form in the studio with everyone playing it. Sometimes a good amount of tweaking gets done in studio with the full band and sometimes the brunt of it will be done in pre-production at my makeshift apt. studio. We’re always out for the best end product and work great together. We make use of the different ways we contribute to their fullest potential.

CM: Has the band ever taken the show on the road in the past? And will we see a tour of some sort in 2013?

Manya: Our travels have brought us to the far reaches of Boston, Albany, Connecticut and the infamous New Jersey (hey that's pretty far for us New Yorkers!). This upcoming Spring / Summer though is looking to be the perfect time for us to start hitting some major road and head all over the country.


CM: Will the new single be the only release this year? Or are there plans for more material later on in the year?

Jiv: The Despicable Summer/Serf single starts off the new year. We are in a heavy songwriting phase right now; we have about 6 new songs in the works. We’ll be playing new material live by March and plan to have a full release later in the year. 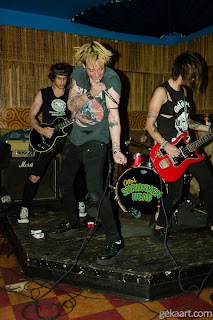 CM: Is there a website you guys wanna plug where we can get up to date news on the new single, get merch and show updates?

Manya: That would be our facebook page, all updates, streams, releases and show dates go through there. We're working on getting our online merch store up and running by the end of the month, like us on facebook.com/thedeadtricks to get it all in one place.


CM: Thanks again for talking with Critical Mass. I see nothing but great things coming for the band this year. Thanks a million.

**Editors Note**
You can stream the NEW single by The Dead Tricks, "The Despicable Summer", on the bands SoundCloud site. The CD single will be released on Infested Records in the coming days. So stay tuned. This is gonna be a smash!
Posted by Critical Mass at 10:36 AM