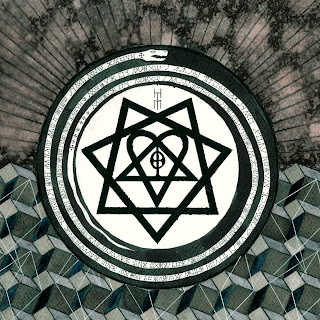 For over 20 years now Finnish rockers H.I.M. have been unleashing their version of "love metal" onto the masses. Sometimes with extraordinary results. And other times just slightly missing the mark. The bands latest album, "Tears On Tape", is another gothic masterpiece with everything you expect from Ville Valo and the boys. Lots of heavy Sabbath inspired power chords infused with melodic, and sometimes melon collie lyrics about love, loss and death.

"All Lips Go Blue" has the H.I.M. stamp all over it. Complete with layered vocals in the chorus and Linde Lindstrom's wha wha shredding guitar solo. This is everything I love about this band wrapped into just under 4 minutes. When Ville sings "My heart, so violently beats along. Bleeding me to want to end it all." it makes me wonder how a song with such sorrow can rock so hard.
The albums first single and title track just drips with angst and beauty. It's a somewhat sad tune, but at the same time you just can't help but sing along. The wonderful piano playing of Burton really accentuates Ville's vocal approach to the point of perfection on this track. And the band, Linde, Midge (bass) and Gas (drums) never push the music over the edge here. Instead they give the song depth and texture where it's needed the most.

The album also has some major rockers as well in the form of "Hearts At War" with a sound that reminds me of "Wings Of A Butterfly" from the 2005 album Dark Light. It shows how well this band gels together. They never overstep or try to outshine each other. Instead they each bring out the very best in everyone else. The drum beat is powerful and when the bass and guitars collide it's so heavy that it could bring walls down with it's sound and fury.

Now, if I had to take something away from this album, it would have to be the 4 "instrumental" tracks. Where I can see how album opener "Unleash The Red" fits in well going into "All Lips Go Blue", I get lost with "Trapped In Autumn", "Lucifer's Chorale" and especially "Kiss The Void". I'm left wondering what the purpose was for 4 instrumentals that seem somewhat out of place on this collection of songs.

But even with that being said, I think "Tears On Tape" is a great album. It shows that H.I.M. are not ready to slow down just yet. They still have some great songs left in them. And as long as they keep releasing quality albums like this one, I'll keep listening and buying them.