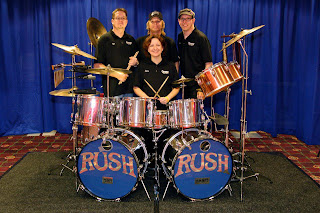 Team "Chromey" L-R Tom Bronkema, Dean Bobisud, Laura Warot Jones (sitting) Christopher Schneberger.
Editors Note: Here at Critical Mass I'm usually trying to help get the word out on up and coming punk bands. But I also like to sprinkle the blog with some classic rock and even a little singer/songwriter material as well. And anyone who knows me personally can testify to my undying admiration for the Canadian power trio Rush. From the musical partnership between bassist/keyboard/vocalist Geddy Lee and guitarist Alex Lifeson that has lasted more than 40 years to the lyrics that percussionist Neil Peart has put to such modern classics as "Tom Sawyer" and "The Spirit Of Radio", Rush has proven time and again that they are a force to be reckoned with, year after year, album after album. So it is an honor for me to interview a couple guys who are not only flying the Rush freak flag high. But are also doing something good in return. One is the owner of "Chromey", Neil Peart's classic 1974 chrome Slingerland drum kit that was used to record the seminal 70s classic albums Fly By Night, Caress Of Steel, "2112" and the live double album All The Worlds A Stage. The other is one of a select few who works with and travels with "Chromey" as it tours across the U.S. and Canada raising money for cancer awareness. It is my pleasure to bring you a very special interview with a couple really great guys, Dean Bobisud and Tom Bronkema.


Critical Mass - Thanks for taking the time to talk with Critical Mass guys. I want to start by saying being a huge Rush fan, this is an honor to talk with you both. "Chromey" was Neil's primary drum kit from around 1974 to around 1976. This kit was featured on the "Fly By Night", "Caress Of Steel" and "2112" studio albums, and was played on the tours for those albums as well. It can also be seen on the cover of the "All The Worlds A Stage" album recorded on the "2112" tour. Dean, how did you actually become the owner of "Chromey"? And how long have you had the kit?

Dean Bobisud - To be honest, being a Rush collector, I didn't even put a thought as to the whereabouts of this drum kit or if it even still existed until a fellow collector informed me of the auction. The auction ended on August 9, 2009 with 18 different bidders and placing a total of 53 bids. After the auction, the drum kit was restored back to it's former original playing condition as last used by Mr. Peart and was then decided to share the kit with Rush fans who can appreciate this unique piece of rock history and help raise money for the American Cancer Society. In November 2009, “Chromey” made its first public reappearance in 32 years at the Percussive Arts Society International Convention (PASIC) in Indianapolis, Indiana . We have since been displaying the kit and raising money for charity for the past two years with the help and support of the fans.


CM - How much of this kit, if any, was used AFTER the 1976 period? When Neil retired the kit did he use, say the chimes, on any other Rush recordings or tours?

DB - "Chromey's" last appearance with Rush was June 13, 1977 at the Liverpool Empire in Liverpool, England. From what I recall, but not being 100% sure, the chimes, the bells, glockenspiel, temple blocks, bell tree and the Slingerland Artist snare with copper wrap commonly known as Neil's “#1”, was carried on to future kits. 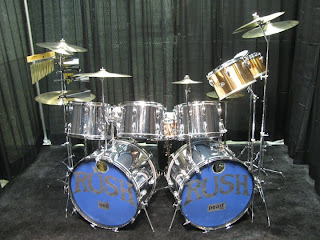 CM - Tom, how did you become affiliated with Dean and "Chromey"?

Tom Bronkema - I went to Indianapolis for PASIC in 2009. That was when “Chromey” was making its first appearance after many years. It was very cool to actually see, and play the actual drum kit used to record Fly By Night, Careess of Steel, the timeless epic 2112, and the legendary All The Worlds A Stage albums, let alone once owned and played by Neil Peart himself. One of the greatest drummers of all time! I’m a huge Rush fan and that moment was for sure, a dream come true for me. I remember as a kid looking at the cover of ATWAS and listening to that record, imagining that I was at that concert. I never believed, in my wildest dreams that 30 years later, I'd get to physically see and actually take part in the setup and breakdown of the kit and without knowing that I would be further involved with sharing “Chromey” with other Rush fans and raising money for charity. It just so happened that I came aboard with this project with Dean. We both have a mutual appreciation of the band. I’ve have enjoyed, wholeheartedly, this entire experience of doing shows with Dean and "Chromey". It is great to make so many people happy through this unique experience, and to help make a difference in someone’s life is important too. My mission with the American Cancer Society is a personal one, since I have lost most of my family to cancer. I just hope to make a difference for someone. It’s a great way to give back. Meeting so many fans along the way has been a real great experience as well. I also made many friends along the way. We’ve also got to see some really fantastic drummers as well!

CM - You guy's have toured, so to speak, with the kit to different cities across the country. And at most shows you actually let fans get behind the kit and play and have their picture taken for a small donation fee that benefits charities. I think this is VERY cool and admirable. Can you tell us what charities you guys support? 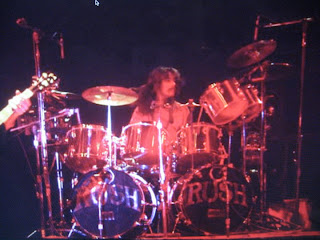 CM - I had the chance to see "Chromey" at a showing of "Beyond The Lighted Stage" in Addison, IL . And, besides this amazingly beautiful kit, there are other Rush related artifacts on display like platinum albums, guitars and various signed items. How did you guy's get these items?

DB - Most of the Rush memorabilia came from charity related auctions, some from private collectors, and the centerpiece of the display through Ebay. We purchase charity related items and display them to help raise more money for charity, how cool is that? Rush has always supported and donated to many charities and the fans have always followed that example.

CM - Hardcore Rush fans are familiar with Rushcon, the yearly Rush convention. Has "Chromey" ever been on display at any of the Rushcon conventions?

DB - Thanks to the girls at Rushcon, "Chromey" did make an appearance there in Toronto , in July 2010. Rushcon is another perfect example of Rush fans uniting and raising money for charity. The girls that run Rushcon rock!! I can't believe all that they do for the fans for this yearly convention held in Las Vegas and Toronto which includes charity auctions, Rushcon merchandise, special guest speakers, trivia games, boat cruises, tour of Anthem and the Parliament building, which is famous for being on the cover of Moving Pictures and also many festivities including the Orbit Room and much more. For any fan that has not looked into Rushcon here's the link, gotta check this out !! 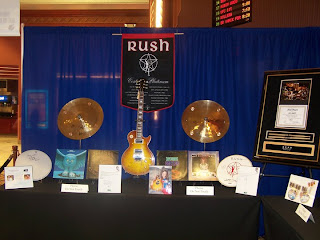 Just some of the cool Rush related items on display at "Chromey" appearances.
CM - I know that recently "Chromey" was on display at the legendary Lakeside Park in St. Catharines, Ontario , Neil's hometown. How was the turnout? And was this the first time you guy's have had "Chromey" on display there?

DB - This was "Chromey's" first appearance at Lakeside Park. We did 2 full days there and this was one of our better appearances. We had a great turnout and much to my amazement, there were many drummers that of all ages that showed up to play the drum kit, also what made this appearance special was the help from Mike Dixon who is on the album covers of Moving Pictures and Exit Stage Left, and Don George who was Neil's first drum instructor. They were both on hand to help setup and breakdown and they also took the time to talk with the fans. The proceeds for this event went to the "Friends of the Carousel" who volunteer their time to help maintain this over 100 year old carousel and the 68 animals which were carved between 1898 and 1905 in Brooklyn, New York. The Lakeside Park carousel was relocated in 1921 to Lakeside Park, Port Dalhousie, now part of St. Catharines where Neil used to play as a child and worked as a teenager.

Friends Of The Carousel:
http://www.stcatharines.ca/en/livein/FriendsOfTheCarousel.asp

CM - Have you guy's been in contact with Neil about a possible appearance with the kit?

DB - No, we have not contacted Mr. Peart. We do respect Neil's privacy and we have no intention of asking him to make an appearance, although Neil is aware of what we are doing with the drum kit for charity. 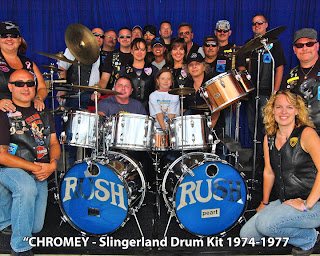 Dean with the Blue Knights Motorcycle Club.
CM - With the year drawing to a close shortly, are there any more appearances coming up in 2011?

DB - No, I do believe we are done for the year. We recently had 2 appearances in Brookfield, WI and Batavia, IL. and in the near future we will be posting for what is planned for "Chromey" in 2012.

CM - Is there any websites you guy's would like to plug where fans can get news on upcoming "Chromey" appearances or to make donations to your favorite charities?

DB - "Chromey" does have a Facebook page which is open to the public and you can keep updated with appearances and a link to the American Cancer Society for anyone who would like to make an online donation to the ACS, Making Strides.

You can also get show announcements through several Rush fan blogs, chat rooms and news forums like www.andrewolsen.com and www.rushisaband.com as well. 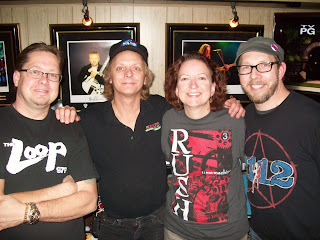 CM - OK, I have to ask this. I've been a die hard fan since 1987, when I was 16 and just fell in love with the "Hold Your Fire" album. My older brother had "Moving Pictures" growing up. But it wasn't until '87 that I REALLY fell in love with this band. Now, I've seen Rush close to 10 times since June '90 on the "Presto" tour. How many times have you guy's seen Rush? And what have been your favorite shows or tours?

DB - I can't speak for the other crew members, but as for as myself, I've been a fan of Rush since ‘74 and have seen them about 18 times and my first Rush concert was Permanent Waves tour on September 8th, 1979 at Alpine Valley Music Theater, East Troy, Wisconsin with Pat Travers. Lawn seat $9.00. My favorite tours would probably be Vapor Trails, 30th Anniversary tour and the Snakes & Arrows tour which I thought was the best light show I've seen yet.


TB - I have seen Rush 24 times. Every Chicago show since the Signals tour in 1982-83. Been to Milwaukee WI , Minneapolis MN , Peoria IL , and Toronto ONT for shows. My favorite tours have been Signals, Hold Your Fire, Counterparts, Test for Echo, Vapor Trails, R3O, and the Time Machine. Snakes and Arrows at Chicago’s United Center was cool, because I got used sticks from Neil that night.
Here are some cool links to “Chromey” stuff:A set up and tear down of “Chromey”:

A video of “Chromey” on display at the Chicago Drum show in 2010 at St. Charles IL.:

CM - Thanks again for talking with Critical Mass guy's. This has been nothing short of awesome for me. I hope we get to see "Chromey" in the Chicago area again real soon. All the best gentlemen.

DB - Myself and the "Chromey" crew members would like to thank you for your interest and support with "Chromey" and the American Cancer Society.

Posted by Critical Mass at 8:57 AM