Interview With Eddie Kobane From The Kobanes 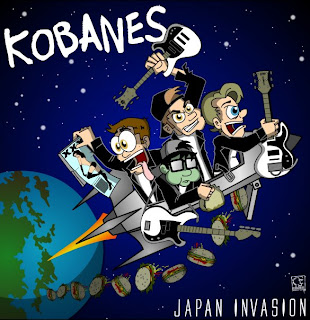 Critical Mass: Thanks for taking time to talk with Critical Mass, Eddie. I had a chance to hear The Kobanes album "False Accusation", and I thought it was fantastic. Can you give our readers some background on the band and how you got started?

Eddie Kobane: Thanks dude, we are happy with it too. There's always something you wish you could have dine to improve, but those are the things I keep in mind for the next record. Me and Mark started the band in April 2009 A.D. we wanted to put a 7" out on Its Alive! outta Orange County, but that didn't happen. So we made a MySpace and got signed to Fixing A Hole to release a full length, "Public Affection". We were playing a ton of gigs in IL then. We toured for two weeks over in Japan and Dumb! Records helped a lot by distribution and whatever. It was awesome. Total Ramones freaks like us. Anyways, me and Marky went to like 50 pop punk shows in high school together at Metro and Fireside Bowl, etc. Being in the suburbs has been pretty rad because Chicago is really hip and we are super regular kids. Ha! LOL.

CM: How many releases do The Kobanes have?

EK: 3 albums and some comp tracks "Public Affection", "Japan Invasion" and "False Accusation". I really liked the Cabana 1 comp we just got on that came out last month. There's one LP with our Kung Fu monkeys on it I like too. Next we are gonna do RAMONES "Halfway To Sanity" album.

CM: I hear a lot of influences in the bands songs. Can you tell us what you're personal musical influences are?

EK: My musical influences are lots of grindcore, emo, pop punk obviously and NOFX, Vandals...lots of pop punk hardcore bands...Mainly the Queers and Ramones
I liked Blink 182 when I was 14 and Green Day when I was in fifth grade. Lately a band called Park Jefferson I have been into. Chinese Telephones and Mean Jeans got some kick ass stuff. The Ergs! were great. On our new album we do an After School Special cover "Somewhere Inside". Groovie Ghoulies, Teen Idols, Lillingtons are definitely huge influences on KOBANES. I like the Wonder Years, Transit, Johnie 3. Its all about RAMONES and obviously we like Nirvana. I run a label that does skate thrash and grind. It's ridiculous. I got ten copies of a three way split CD from Russia on its way in the mail. Godstomper, Warsore and Agathocles are huge personal influences.

CM: Is the band currently signed to any label, or do you guys self release your material?

CM: I know you guy's have a show coming up in Elgin this week at Gasthaus (Fri, May 20). Are there any more shows planned for the coming weeks?

EK" We are going on tour next month for two weeks. We already did Japan and Northern east coast U.S. Now we go out to California. Its gonna be two weeks and I booked it all myself. This is van #2 and its black. Van #1 was red but we left that in Grand Rapids.

CM: Who are some of your favorite bands to play with live?

EK: Sheckies, Johnie 3, Teenage Bottlerocket, Huntingtons, Sloppy Seconds, when Phil Hill was in the band that was great. Wikipedia that shit.

CM: Is there a website where people and get in touch with the band, get news on up coming releases, shows and merch?

EK: No. My email is edwardiv84@gmail.com that's how you can find out and I will give you my phone #. Google us or something if you are scared, but we don't really try that hard with the internet its a lost cause. We got better things to do. Eddie Kobane on Facebook.com