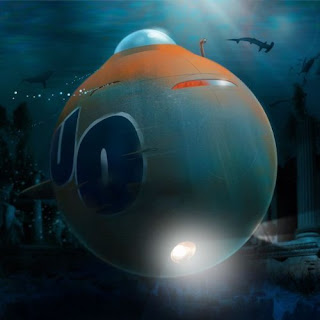 It's hard to believe it's been so long since Chicago's own Urge Overkill have had a new release. Back in the early 90's they rode a wave of hits starting with a pair of killer tunes from their 1993 album "Saturation". "Sister Havana" and "Positive Bleeding" got some major airplay on radio as well as heavy video rotation on MTV. Then came the Quinton Tarantino film "Pulp Fiction and the lead single off the soundtrack, UO's cover of Neil Diamond's "Girl You'll Be A Woman Soon". Again came major airplay and video rotation.

Expectations were high for the bands next album entitled "Exit The Dragon". But turmoil within the band as well as drug addiction made for a dark album that wasn't received well, and singer/guitarist Eddie Roeser left soon after. Singer/Guitarist Nask Kato and drummer Blackie Onassis forged on with Roeser's replacement Nils St. Cyr for the albums tour, but broke up after the tours end.

Fast forward 16 years! We have a brand spanking new UO album entitled "Rock & Roll Submarine". The album is jam packed with that classic UO sound. Kato and Roeser sound just as great and vibrant now as they did last time you heard them on record. The band still has the crunch and licks that made them famous in the first place.

Gone is Onassis, replaced by Brian "Bonn" Quast and bass player Mike "Hadji" Hodgkiss. The band is so solid on R&RS that it almost sounds like this album was recorded back in the early 90's, but with a modern feel to it. Songs like album opener "Mason Dixon" and "Little Vice" are straight up, take no prisoners rockers! First single "Effigy" is another stand out track that shows the power of Roeser's vocal ability is still intact after 16 years. The same can also be said of Nash Kato! Songs like "Poison Flower" and "Thought Balloon" showcase his unique voice. Elsewhere is the beautiful acoustic track "Quiet Person" that shows a softer side that wasn't evident in earlier UO albums. On "The Valiant" Kato sings "it's great to be valiant triumphant!" I couldn't have said it better myself!

UO are like a fine bottle of wine. Let it sit for 16 years, and it gets better with age! "R&RS" was well worth the wait. Now let's just hope it's not another 16 years before we get another dose of awesomeness from these suave rockers!