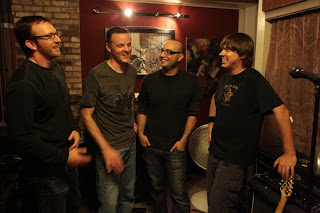 Diesel Boy circa 2010 L-R: Justin Werth, Geoff Arcuri, Dave Lake and Greg D. Hensley
Critical Mass: Thanks for taking the time to talk with Critical Mass, Dave. It's been over 10 years since the last Diesel Boy album, "Rode Hard And Put Away Wet". What have you been up to since the band split up?

CM: Can you give us a little history on the band? How did you guy's get together?

DL: Oh it's a long and boring story to be honest, but Diesel Boy had a few folks leave the band in quick succession. Right around the same time, a band we were friendly with called Escape Goat had basically the same thing happen. So three dudes from Escape Goat joined me in Diesel Boy and that was lineup that recorded our first two albums.

CM: On songs like "Cock Rock" you mention being a fan of 80's metal bands like Dio, Dokken and Metal Church. Growing up in the 80's myself, I actually listened to some of those bands. Did you really listen to them or was that just tongue in cheek fun?
DL: No, I was a teenage metalhead of the highest order. I spent my high school years banging my head and blasting landmark L.A. metal station KNAC as loud as I could. I was super into Motley Crue and Metallica, Iron Maiden, Faster Pussycat, L.A. Guns, Tesla, Dokken, Cinderella and on and on. It was the late '80s in L.A. so the Sunset Strip was totally happening, with the street packed with spandex and hairspray and bands like Poison, Warrant and Tuff headlining every weekend at the Roxy or the Whiskey or Troubadour. Unfortunately I was too young and uncool to really indulge but I tried. A lot of my high school friends were into Fishbone and the Red Hot Chili Peppers and Funkadelic, so that stuff got played a lot too, but I definitely took a lot of shit for my taste in music back then. I went to a lot of concerts too. I had one metal buddy in particular, and as soon as we could drive, we started going to every big show that came through L.A. You can even find the two of us in the "Year and a Half in the Life of Metallica" home video. We got interviewed at Tower Records in Hollywood the night Metallica's black album was released. They stayed open until midnight to sell the record, and when fans came out from buying it, the cameras were there. We say a few things to the camera and I have a ridiculous haircut and I'm wearing an Edie Brickell and the New Bohemians t-shirt. Beat that.
CM: Who were some of your musical influences growing up?
DL: The Beatles have endured the longest, which I discovered as a kid and who I still listen to frequently. Duran Duran were my very first favorite band and Men at Work was the first concert I ever went to. I played the first two Men at Work album to death. I was basically into '80s pop music as an adolescent – whatever they played on MTV. Then metal took over after hearing Motley Crue's "Shout at the Devil." And it was Bad Religion's "Against the Grain" that turned me on to punk. I couldn't believe music could be just as melodic as the stuff I grew up listening to but with so much more intensity and such thoughtful lyrics.
CM: There are a couple other songs I want to ask you about. Was there really an "Andy Stern"? And is that story about him coming up with the catch phrase "Mean People Suck" true?
DL: Yep, he's a real guy. And yes, he did create those stickers, but he didn't invent the phrase, he borrowed it from NOFX, who have a song called "Mean People Suck" on their "S&M Airlines" album. He was a fellow musician in our circle of friends who went on to open a screen printing business, Diesel Fuel Prints, which is still around, though he moved to Portland years ago. But that Mean People Suck sticker definitely paid his rent for a few years.

CM: I gotta tell you, the song "Waltz Of The Disappearing Girl" was one of the greatest songs I feel you did in Diesel Boy. Such a beautiful song. And a huge departure from what we came to expect from the band. Was that song autobiographical?

DL: Thanks. And yes, that song is about a specific person. There are actually a few songs on the "Rode Hard and Put Away Wet" record about that girl. Most of the Diesel Boy songs contain autobiographical elements, or were at least inspired by someone in some capacity. That song is autobiographical though. I was hurting over that girl when I wrote it and the lyrics and whole song just kind of spilled out in a matter of hours, which wasn't usually the case for me. And it was recorded in one take in the living room of the recording studio.

CM: With 4 amazing albums under the bands belt why did you guy's break up?
DL: We didn't really break up as much as take a really long break. It seemed like things with the band had just kind of run their course. I know I needed a break and I definitely wanted to make more money than I was making. I was also worried about what my future would look like without any skills other than singing and playing guitar. Though touring and making records was a blast, the lifestyle was rough and the pay was meager. I ended up taking a job at a music dotcom in Silicon Valley which eventually got acquired by Microsoft, which is how I ended up in Seattle. I worked at Microsoft and did Diesel Boy simultaneously for a bit, but it just wasn't sustainable. There were some personal things going on for some other band members too that also made touring very difficult, and that played in to us stopping  as well. But we never officially broke up or had some conversation about stopping, things just kind of wound down.
CM: I know that you and the other band members live between Washington State and California now, which would make it hard to do a lot as a continued unit. But last year you guy's actually got together and played again. What was it like reuniting after so long and playing those songs again?
DL: It was awesome and just like it always was for all those years in our rehearsal space. We reminisced and laughed a ton. All those old band quirks and behaviors immediately surfaced, which was actually comforting. But I love those guys and we all have really fond memories of our time together and we had a ball playing together again. I suspect that won't be the last time it happens.

CM: The four of you still look fit, and you're not geriatric yet. What are the odds of a Diesel Boy reunion album and/or possible tour?

DL: We talk about it. Time is the biggest issue for us. Most of us are married and have kids, which makes any kind of endeavor like that really tough. I suspect we'll do something at some point, but whether it's just a couple of shows or another record I have no idea. I suspect something will emerge that will just makes sense and we'll do it.
CM: When all's said and done, what do you think people will remember most about Diesel Boy?

DL: That's for the fans to decide, not me. I'm just pleased there are a loyal few who do remember what we did fondly I know we had a blast doing it.

CM: Is there a website where fans can get in touch with either you, the band or any other bands you guy's are currently playing in?
DL: Our Facebook page (http://www.facebook.com/Diesel.Boy.fb) is probably the best spot. There are links on it to all of our various projects and bands and the four of us check out the page pretty regularly and weigh in when appropriate.
CM: I want to thank you again for taking the time to talk with Critical Mass, Dave. It's been a blast getting the lowdown on all the questions I've always wanted to ask. I appreciate it. Thanks again. 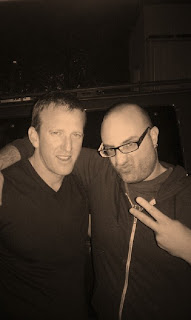 According to the bands Facebook page, Dave and Diesel Boy lead guitarist Justin Werth met up in Dave's current hometown of Seattle, WA, where Justin was on tour with Fang, to write songs for a new Diesel Boy album. This will be the bands first release since 2001's Rode Hard And Put Away Wet.
Posted by Critical Mass at 9:19 AM