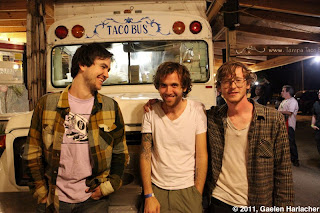 Critical Mass: Thanks for taking the time to talk with Critical Mass guy's. For people who may be new to Sundials, can you give us a little background on the band? How did you get started?

Sundials: We're a three piece pop-punk band from Richmond, VA. Harris plays guitar and sings, Carl plays bass and sings,and Cory plays drums. We got started as a band in late summer/fall of 2009 when Harris approached Carl and Cory about starting a band that sounded like Young Widows. Clearly, that isn't what we ended up sounding like, and the Young Widows guys would probably squish us if we ever made that comparison. We ended up writing six songs and recording them as an EP that is available for free download at www.ifyoumakeit.com. We played our first show in October of 2009.

CM: Your new album, "Never Settle", is such a departure from what most "punk" bands are doing in this day and age. You have a sound and style all your own. What bands are you guy's influenced by?

SD: We all grew up in punk, but in slightly different sub genres. Cory comes from the DC suburbs, and grew up listening to a lot of stuff put out by Dischord, as well as bands such as Malady and Hot Snakes. Harris grew up listening to a whole bunch of stuff, but has been hugely influenced by 90’s indie rock bands such as Pavement and The Lemonheads,as well as pop-punk such as Alkaline Trio. Carl listens almost exclusively to Punk O’Rama 4 and The Beatles.

CM: Do you all contribute equally in the songwriting process? Or are there certain songs where one person writes a majority of the lyrics and another comes up with the melody?

SD: All three of us write music and lyrics. Usually, one of us will have a song that is almost completely finished and then we will start practicing it together and work together to arrange the song and give ita little more of a cohesive shape. You could say that we write songs individually but arrange them as a band.

CM: You guy's are currently on the road with Timeshares and Hold Tight. And in July you head over the pond for shows in the U.K. with Caves. Is this your first extensive tour?

SD: We’ve done plenty of touring in our short life as a band--including a twenty-seven day tour of the eastern half of the US last summer--but have never done anything quite as crazy as leaving the country.

CM: Are you guy's excited about touring outside of the country?

SD: It's hard to fully express how excited we are for the UK tour. Caves have been so wonderful in helping us make it a reality and we can't wait to live in a van with them for a few weeks. We really don't know what to expect over there, but we are beyond ecstatic at the opportunity. Our main concern right now is that we'll get deported or someone will use the cruciatus curse on us for making too many bad Harry Potter jokes. Oh no! There's one right now!


CM: In such a short period of time the band has released a 6 song EP, a split with the band Spraynard  as well as "Never Settle", your first full length. Are there any plans to release more material in 2011?

SD:We have already finished recording and mixing songs for an Art of the Underground Singles Series 7" and a split 7" with Caves to be released on Kiss of Death. We plan on having at least three more 7"s out by the end of 2011. We try to keep pretty busy.

CM: What can fans expect from Sundials in the coming year? Will we be seeing a Sundials full length U.S. tour in the near future?

SD: Extensive touring is difficult as all of us have been in school for the entirety of the bands existence. Carl just recently graduated, but Cory and Harris are still working towards getting undergrad degrees. We’re certain that we will end up doing a full US tour, but it probably will not be until we release our second LP.

CM: Is there a website where fans can reach you and get news, tour dates and merch?

SD: We recently started a blog for all things Sundials, you can check it out at www.sundialsva.tumblr.com.The blog has links for tour dates, news, and our Bandcamp, where you can download most of our stuff for free. We have yet to organize an official merch store, but you can buy records and shirts at both www.trafficstreetrecords.com and www.toxicpoprecords.com.

CM: I want to thank you guy's again for taking the time to talk with Critical Mass. I seriously love the new album. And I want to wish you all the very best on the tour and in the future. I hope to see you in Chicago real soon. Thanks again guy's.

SD: Thanks! Hopefully we’ll see ya in Chicago in the not to distant future.


Editors note: Here is a link to YouTube to listen to the brand new Sundials song "Drag Me To The Core". It's a great song. Check it out.
Posted by Critical Mass at 8:30 AM