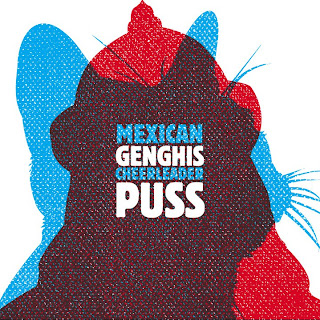 Critical Mass: Thanks for taking the time to talk with Critical Mass guys. Mexican Cheerleader has been around for a number of years and has contributed a lot to the Chicago music scene. Can you give us a little history on the band? How did you guys get together?
Andy: Apocalypse Hoboken and Oblivion. It’s like two red-headed stepchildren finding each other.  And then Karl's I’ve known as part of Lynyrd’s Innards since, well, Ice Cube went solo, I guess.  When musicians become friends, and then certain people you’re playing with can’t keep their heads on straight, it only makes sense that it’s less of a hassle to play with friends.  It was an inevitable marriage.
Karl: I saw MC several times back in the Mascara Snake days, and told Pete that if she ever quit for any reason, I would like a shot at joining the band, since they were so great. Then she quit, and I was given the chance to audition. I’m still waiting to find out whether or not I’ve been accepted.
Scott: Gabba gabba we accept you, we accept you, one of us.
Pete:  I honestly can’t remember anything except Scott and I eating t-bone steaks at an IHOP with our bare hands. A few weeks later, we were playing a show together, that was July of 1999.


CM: It's been a few months since "Genghis Puss" came out. Can we expect anymore new material in the near future?
Andy: It just came out, no?  I suppose we’ll record again soon, but it’ll be more Physical Graffiti than Please Please Me.  No.  Wait.  Reverse that….
Karl: It’s going to be like if every song on Zen Arcade was The Baby Song.


CM: What are some of the bands musical influences? And do you bring those influences to the table when it comes time to write new songs?

Karl: When I get the “what do you guys sound like?” question from well-meaning but ultimately disinterested people I meet at parties, I shorthand the band as Cheap Purple for the mix of classic pop hooks and dirtbag rock. Every now and again, we throw in DRI’s Dealing With It for shits and giggles.
Pete: You say Cheap Purple, I say T. Mex.


CM: Has the band been able to tour outside of the Chicagoland area in the past? And are there any plans for a possible tour in the near future?
Andy: We’ve played where we were invited; places that are within a day’s drive like Cleveland or Indiana.  Did we ever actually play in Denver?  Anyhow, we’ve never pursued a tour and unless someone demands our services, we’ll likely stay a Chicago phenomenon.
Scott: Ooooof.
Pete: We’ll likely stay Chicago Phantoms.
Karl: The romance of the road loses its luster in direct proportion to increasing age. The idea of laying my sleeping bag down next to the cat box is even less appealing now than it used to be. If we could get Bruce Dickinson to fly us to other cities to play, I’d totally be down with that plan, if only so I could go golfing with Nicko McBrain.
Scott: With the exception of the golf thing I’m totally down with the Karl's touring plan, Bruce Bruce has always been a big hero of mine.


CM: I remember years ago, you guys played the Fireside quite often. Now that the shows there are few and far between where are some of your favorite places to play?
Karl: I like Beat Kitchen, and the Bottom Lounge is great if you’re opening up for someone who can get people to show up.
Scott: I love the Prodigal Son and Cabaret Metro.  Nitecaps was an educational experience for all.
Pete: Dumpsterland and the Bog Theater.


CM: Are there any local bands you really enjoy doing shows with?
Andy: 97-Shiki and the Arrivals come to mind.  Umm…..
Karl: The Brokedowns are fun to hang out with and a good band, to boot. Nobs and Stoves.
Scott: Pretty much what they said.

Pete: There’s too many I wish we could have played with. Most of have already broken up.


CM: Are there any big plans for the band for the second half of 2011? Any big gigs coming up that you can confirm?
Karl: We’re playing Pitchfork, performing Anthrax’s Among the Living from start to finish. This will be the first that anyone else in the band has heard about it, though.
Scott: We’ve discussed playing Helmet’s “Strap It On” in its entirety, if that plan comes to fruition we will be gods, locally.
Pete: I’d like to play my kid’s birthday party, so I can completely embarrass him and make it all about myself.


CM: Is there a website where fans can get up to date news on shows, releases and merch? Or anything else you wanna plug?
Andy: We still have Mexicancheerleader.com and that dusty ol’ MySpace page, right?


CM: Thanks again for taking the time to talk with Critical Mass guys. I'm looking forward to seeing you again. Thanks again.

Scott: Thank you.
Pete:  I honestly can’t remember anything except Scott and I eating t-bone steaks at an IHOP with our bare hands....
Posted by Critical Mass at 7:42 AM