Interview with Sean from The Wrong Boyfriends 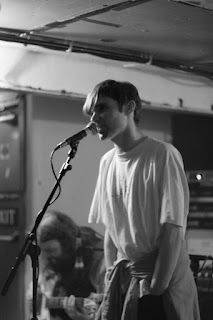 Critical Mass: Thanks for taking the time to talk with Critical Mass, Sean. For anyone new to The Wrong Boyfriends, can you give us a little history on the band and how you guys got together?

Sean: It began with a spot of monster hunting back in 2008. Myself (Sean Murphy) and founding member Peter Knox, a keen amateur cryptozoologist, loaded up the kayaks and made north for Loch Ness.
Through ferocious winds and life threatening swells we battled across to the side of Loch which is popular with serious hunters of the sea serpent, known colloquially as Nessie.
Like thirsty, salty men we made for the nearest bothy (Scottish word for a basic shelter, usually left unlocked and available for anyone to use free of charge).
With a throbbing head and bitter heart I called out into the darkness to enquire about tap water.
A voice answered me in broken English. At first I couldn’t be sure if it was man or beast. Even as the hairy, shuffling form lurched into the light it took me a moment or two to recognise Dominic Troup. His long grey hair and flowing beard were matted with grease and dry haggis.
Slowly we coaxed the truth out of him by offering whisky which he guzzled greedily down his gullet.
It transpired that Helensburgh’s finest drummer had headed for the hills out of deep disappointment with the modern world, which he said was spinning ‘rapidly out of control’.
All thoughts of the monster seemed ridiculous now. We broke out our special chieftain tobacco, smoked the pipe of brotherhood and swore from that day forth we would be tighter than a totem pole.
We had other members from time to time (shout out to Guillaume and Kieran who also played on WFCD) but none of them could cope with being left alone in a room with Dom, or Demonic Troup as we call him, for any length of time.
Today The Wrong Boyfriends is a perfect synergy of Pete’s suave metropolitan charm, my immaculate punctuality and Dom’s backwoodsman vigour. 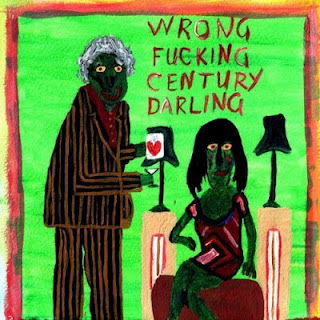 CM: The bands newest album "Wrong Fucking Century Darling" is out now. Is this the bands first release?

Sean: Yes it’s the debut release. I guess we all felt like we are in the wrong fucking century - except for Dom.
I wanted to be in the 19th century so I could hang out in France with Gustave Dore the famous artist, engraver, illustrator and sculptor.
Pete wanted to be in back in the 20th century. Specifically, 1963 so he could spend time with his all time idol William Hartnell, who played the first Doctor Who.
Dom felt that he was in the right century but was upset that it’s populated by the wrong people.

CM: I hear so many different influences in your music. Who are some of the bands personal musical influences?


Sean: I listen to black metal pretty much all the time. Whether it be a child’s birthday party, a scoundrel’s wedding or the anniversary of the day I discovered the thrill of bare-headed-cycling, I’ll be zoning out to Burzum, Darkthrone and Forgotten Woods, usually in that order.

Peter is extremely retro but avant-guard with it. He listens exclusively to the works of the BBC Radiophonic Workshop, who of course crafted the majestic Dr Who theme tune.
Dom only has ears, and eyes, for Björk, Joanna Newsom and the little known outfit Monkey Boy, a trio from London, whose t-shirt is constantly attached to his manly frame.
CM: When it comes to songwriting is it a group effort or is there one primary songwriter in the group?

Sean: Usually I turn up with the best idea in the world and then they insist on making changes to it, ruining what I’m trying to achieve in the process.
I don’t mind telling you it’s extremely frustrating and I have often considered bribing a friend of mine (Hi Ewen from VOM) who has recently qualified as a hypnotist to make them submissive to my every whim and command.
If they were allowed to speak they’d tell you that they come in with great ideas all the time and I ruin them by singing but to be honest they’ll say anything for attention. 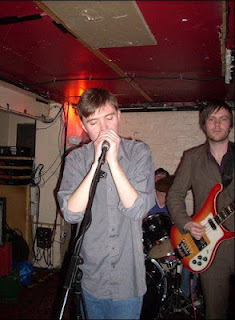 CM: Are there any plans to release anything else this year? Either another full length, an EP or even a 7" single?

Sean: Yes, yes, and yes. Well only one yes really. This year we will release anther full length album and it’s going to be even better, or at least as good as the first one. This time we’ve taken onboard a lot of the things people said about the first album and completely ignored them in order to do exactly what we want.
This is a mind trick we’ve employed for some years now and our complete disregard for what an audience might want to hear is paying off some big dividends now.
I don’t like to namedrop but we were recently asked to support U2 and Dom told Bono to go fuck himself.
I was devastated as I wanted to talk about delay pedals with The Edge.

CM: Do you guys play a lot of shows outside of Scotland? And are there any plans to tour Europe behind the new album?

Sean: To date we have not played outside of Scotland. I blame Dom for telling Bono to go fuck himself personally.

CM: Would there be any chance of touring in the United States at some point in the near future?

Sean: Sure, from now on Pete has replaced Dom as the band member who speaks to band members of other bands.
I know he’s recently been chatting up such luminaries as Ted Falconi, Helios Creed and Lady Gaga - so watch this space. 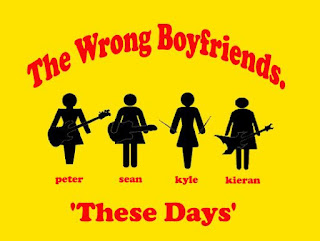 CM:  Is there a website you wanna plug where fans can get up to date news, tour dates and merch?


Sean: Sure thing we would like to shamelessly plug our dear (but not expensive) record label Kovorox Sound where you can buy our actual album for actual money:
http://www.kovoroxsound.com/THE%20WRONG%20BOYFRIENDS%20-%20WRONG%20FUCKING%20CENTURY%20DARLING.html
For gig news and to get in touch with us, yes please, try here:
http://www.facebook.com/pages/The-Wrong-Boyfriends/155149691170970?sk=wall

Posted by Critical Mass at 6:07 AM