Interview With Ryan Rockwell From Mixtapes 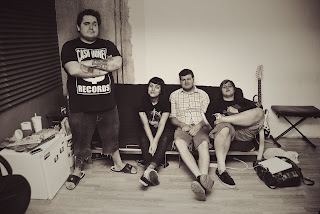 Critical Mass: Thanks for taking the time to talk with Critical Mass, Ryan. Your band recently played here in my hometown of Chicago. Was this your first time here?


Ryan Rockwell: It wasn't our first time. We have played at Ronnies twice before. They were smaller more last minute shows, though one was with Direct Hit! and it was awesome. We like Chicago, and are excited to play there again in June!

CM: Can you give us a little history on Mixtapes? How did you guy's get together?


RR: We started just Maura and I writing songs acoustically, then a bunch of crazy stuff happened and a long twisted fun road led us here. We are pretty much the same. We write songs a lot and play whenever we can, anywhere we can.


CM: I saw a picture of a Descendents inspired Mixtapes t-shirt. Besides the obvious, who inspired the band musically?

RR: Hmm that's hard to say. Overall I'd say a lot of 90's indie rock and pop rock stuff, mixed with Midwestern pop punk with bands like Rivethead, Dillinger Four, Banner Pilot etc... I guess that might not be apparent in our music, but it's there. Those mixed with bands like The Hold Steady, The Weakerthans and such.

CM: Being from Cincinnati I have to ask, is there a big punk underground in your hometown?

RR: There are some cool bands here, and alot of different scenes. But I don't really know where we fit in. I guess I'll leave it at that. We aren't that cool in Cincinnati.

CM: Mixtapes newest release is called Maps. Is there any new material in the works?

RR: We just released our new 7 inch/EP on May 3rd! It's called Hope Is For People and it came out on Animal Style Records. We are really stoked on it, and if you want to hear it there is a stream on www.punknews.org. We also made a video for it which you can find at the Absolute Punk website. I'm also sure if you wanted to illegally download it it would be easy to find. So please hear it one way or another!

CM: I see the bands upcoming shows are in the Midwest and heading to the east coast. Any plans for a cross country tour in the near future?

RR: After this upcoming Red City Radio tour, we are doing Fireworks CD release tour which also features Hostage Calm, both will be amazing. Then we will be hitting the west coast in July. We will have details for that soon!
CM:Who are some of your favorite bands to play with?
RR: Fireworks, Dear Landlord, Light Years, Wonder Years, ICP.

CM: Is there a website where fans can get news on upcoming shows, new releases and merch?
RR: www.mixtapesohio.com has all of our tour dates, a blog, merch, news and everything!

CM: Thanks again for talking with Critical Mass, Ryan. I wanna wish you and the band the best in the future. I'm looking forward to seeing you guy's in Chicago again.

RR: Thanks, we will hang and eat pizza!
Posted by Critical Mass at 4:46 PM