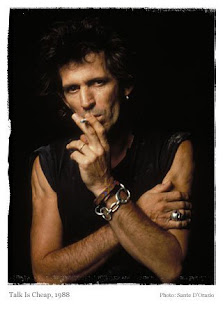 
May 20, 2011 (New York, NY) -- Keith Richards has his fingers in many pies these days.  He's, of course, appearing again beginning this weekend with Johnny Depp in the latest "Pirates of the Caribbean" installment.  His best-selling memoir is out in paperback.  He's working on a new solo album with his band the X-pensive Winos.  And then there's the Wingless Angels.
If you don't know the story, you should read this excellent interview with Richards.  But essentially, while visiting his beloved Jamaica over the years Richards became friends with a group of local musicians, including the late, great angel-voiced Justin Hinds.  It took some doing, but Richards eventually convinced the crew to record some of their music.  There was an album in the mid-1990's and then another just last year.
They are spectacular.
These are not pop or rock records, though.  They are percussion-and-voice based, with only a hint of Richards' guitar here and there.  (Apparently it took some time and trust for Richards to convince the rastafarians involved that his guitar work wouldn't destroy the spiritual connection to the earth that they believe their collaboration holds.) 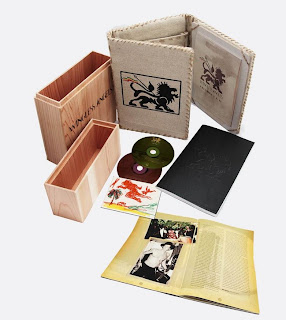 Assembled by and recorded with Keith Richards, the Wingless Angels Deluxe Limited Edition is the definitive way to explore the world of Rastafarian Nyahbinghi music. This collection captures the sound and spirit of these extraordinary musical sessions, most recorded Richards' home in Jamaica.  And it includes the last known studio recordings of Justin Hinds, too boot.


The set includes:
• Hemp-wrapped tri-fold book housed in a solid wood box;
• 2 CDs (Wingless Angels I and II);
• Leather-bound, 32-page book with interviews, rare photos and more;
• A lithograph print of Keith’s Wingless Angel sketches;
• DVD of Wingless Angels - A Short Film: Culled from never-before-seen interviews with Keith, his personal home video footage from the making of the recordings in Jamaica and rare footage of Justin.


Only 1,000 of these handmade sets were produced so when they are gone, no more will be made.  This may indeed be your last chance to pick one up.
PopMarket is a great place to find deals on some of the best the Sony/Legacy has to offer, and this is a truly unique deal.
Continue reading on Examiner.com: Keith Richards helmed "Wingless Angels" deluxe set a glorious steal at PopMarket - New York Rock Culture | Examiner.com http://www.examiner.com/rock-culture-in-new-york/keith-richards-helmed-wingless-angels-deluxe-set-a-glorious-steal-at-popmarket#ixzz1MvuADXjo
Posted by Critical Mass at 5:07 PM