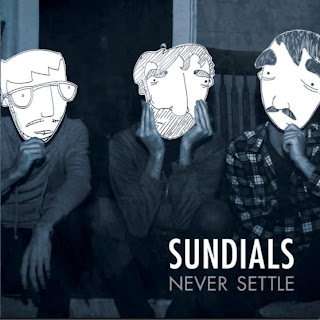 With spring upon us and the weather finally getting warmer, I look forward to a few simple pleasures in life: baseball, cooking out on the grill, the smell of fresh cut grass and what I lovingly refer to as "summer music!" You know, that album that just doesn’t sound the same in the dead of winter? The one that gets multiple plays while you’re hanging in the backyard with friends? Yeah, that one! Well, I found a new one to add to my collection. It’s by a trio from Richmond, VA that calls itself Sundials.

Their new album, Never Settle, is jam-packed with jangly guitars, honest lyrics and a sound that’s so familiar, you swear you’ve heard them before...but at the same time, it’s original; something new and fresh, and that’s what makes this album so wonderful. Songs like the title track, "47 Million," and "Take You In My Coffee" are serious rockers that make you want to get up and dance. The songs just have this groove that takes hold of you and doesn’t let you go until the end. That’s the mark of a great record. Other soon-to-be classics are the slacker anthem for a new generation, "Probably Not," and "Crosby Sucks," with its blatant use of 'fuck' in the chorus, are just two high points on an album full of high points.

These three guys embody what was so great about the early '90s alternative scene without sounding cliché and dated. Honesty, sincerity, staying positive and having fun is what makes this album a true gem. Now, there is no such thing as "the perfect album," but this one comes mighty close. If I had to take one thing away from it, it’s that the album's 12 tracks come in at just around the 30-minute mark, leaving this listener wanting more. But, if this band continues to make albums as good as this one, I will have no problem waiting for the next one. Keep an eye out for Sundials. I have a feeling if the band continues to put out quality material such as Never Settle, they very well could be the next big thing.

Posted by Critical Mass at 6:56 AM