Interview with The Napervillain MILF's 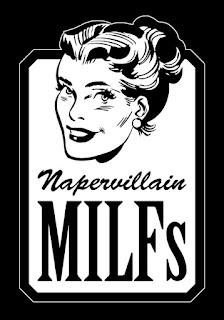 The Napervillain MILFs are Chicagolands "Anti Cover Band Cover Band."  They play a wide array of material from Soft Cell's "Tainted Love" to Husker Du's "New Day Rising". And they do it their own way, putting a harder edge to certain songs while also staying true to the original style of others. I recently had the chance to speak with singer/rhythm guitarist Michael Mazza and lead guitarist Michael Cox before their set opening for The Bollweevils at Brauerhouse in Lombard on Easter Saturday April 7, 2012. Here's what the guys had to say about their sound, what's next for the band and how they came up with that kick ass name!

Critical Mass: Thanks for taking the time to talk with Critical Mass, guys. I appreciate it.

Michael Cox: Well thanks for talking to us.

CM: For those new to the band can you give us some history on the band and who's in it?

Michael Mazza: Well, we've got Michael Cox on lead guitar, myself on vocals and rhythm guitar. And we're in the process of finding a new drummer right now. Larry Ohler is playing his last show with us this evening. He was a temporary drummer to get us off the ground.

MC: We owe Larry a great huge debt of gratitude.

MM: We actually booked our first show in December without a drummer. So we actually had our show on schedule at Reggie's, and had no fucking drummer. So he kinda bailed us out. So he's played the first gig with us and has played 4 or 5 gigs since then.

MC: He's also done double duty between Perversions (Larry's full time band) and Napervillain MILF's where he would play 2 sets in one night. So, Larry's the fucking man as far as I'm concerned.

MM: And we also have Walter Kiefer on bass.

MC: Walter will not be with us tonight. He had something come up in Ohio.

MM: Yeah, he had a family reunion which is not very punk rock (laughs)

MC: But we have the very VERY capable Steve Brown filling in for him tonight. So he'll be helping us out. 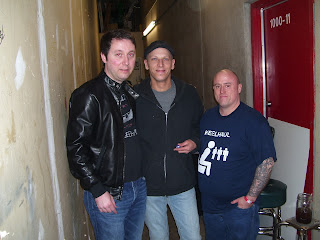 CM: You guys call yourselves "the anti cover band cover band, declaring war on crappy cover bands like 7th Heaven". Can you elaborate on that?

MM: Yeah, I play in an original project that's been going for 8 years.  And every winter we go on hiatus from December to March because our lead guitar player drives a snow plow. And the dude's on fucking call like all the time. And I kinda wanted to keep playing out in that 4 month window and keep the chops us. And I really love playing out, so I thought "hey I wanna form a cover band." And originally it was gonna start as a Cult tribute. And then I figured the window for something like that would be about 7 people, so I kinda ditched that. So I figured I would start a cover band, but a cool cover band doing Replacements, Husker Du, Guided By Voices. That kinda stuff. So I called Michael, who I went to High School with and found out we had a lot in common music wise. So I called him and said come on over and we'll jam. And since then it's been going really well.

MC: Like Michael said, we got together last year, and tried to kinda work through a master list of songs that we would like to cover. Songs that we thought would be a really kick ass cover. Songs really off the beaten path. And we're sifting through this list and we got on the discussion of 7th Heaven (a local Chicago area tribute band). And Mike's got this great 45 minute rant about how these shop working Napervillain MILF's go crazy for them. They LOVE this shit! And I said "Well, we should just call ourselves Napervillain MILF's" as a big fuck you to them.

MM: If I have to hear "Don't Stop Believing" at a show I'm just gonna shoot myself. I mean who wants to hear that?

MC: And the thing is, the way Mike and I have a theory on this, is that you take 5 women who go to see 7th Heaven for whatever odd reason. Out of those 5, you have 4 who are perfectly happy with the music and its right up their alley. And that's fine. This is America. It's a free country and you can listen to crappy cover bands if you want. Now you take that 5th girl in that gaggle of 5, and maybe she listens to The Cure, she listens to (Naked) Raygun, she listens to Pegboy, she listens to, y'know, all the great music that came out in the early 90's and 2000's, the music of our generation. So, we're looking for that 5th girl in that gaggle of 5 who wants to hear a good Raygun cover, who wants to hear that Pegboy cover, who wants to hear Shot Baker, Husker Du and The Replacements. That's kinda what our niche market is. 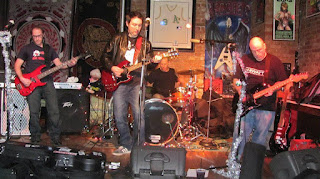 MC The anti cover band cover band. I think we have a good thing going. Mike's got his outlet for his original music through Collectors. I don't have an original project right now, to be honest with you. My hands are kinda full right now.

MM: Yeah, it's kinda two different enemies, so I actually really have a lot of fun doing this. So I think it'll continue to be just covers. But cool shit. Y'know it doesn't have to be Bon Jovi and fucking Journey all the time. The tribute scene in Chicago is kinda....

MC: Wacky to say the least.

MC: During the genesis of the band, to backtrack slightly, a week before our first show I dragged Mike out to see the Nefarious Fat Cats. The Nefarious Fat Cats are Jake Burns (Stiff Little Fingers), John and Joe Haggerty (Pegboy) and Mark Derosa (Dummy). And during that infamous meeting (with Mike) I said "You have to come to this Christmas show at Liar's Club. THIS is what we gotta be like!" And he heard me screaming that until the cows came fricking home. And he came out to the show and within the first 3 songs, I mean John Haggerty on guitar. What more can you ask for?

MC: The first words out of his mouth were "I quit!" (Laughter)

MM: They were fucking amazing.

MC: Those were the guys we looked up to as far as setting that goal.

MM: Those guys play out twice a year and they're better than any cover band in the city. Easily!

MC: Hands down. So that's who we look up to, to set the goal as as far as being the anti cover band cover band. It's The Nefarious Fat Cats hands down. 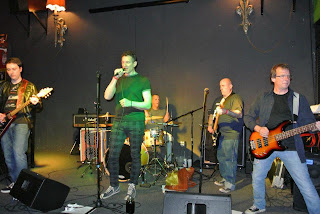 CM: I know Jeff from Naked Raygun has joined the band on stage in the past for your cover of the Raygun classic Rat Patrol. I take it Jeff's a fan?

MC: Yeah, one is a surprise and we can't give it away. But he will be singing 2 songs. And Jeff said it was an honor for him to sing with us. And for Jeff to say that...

MM: We're honored to sing with HIM.

MC: Yeah, we're honored to back him up. Jeff's just a real nice guy. He's very personable when you talk to him. And he's just a regular guy. And for him to wanna get up on stage with us is a blessing. We're very humble.

CM: What's next for the MILF's? Any big plans for the rest of the year?

MM: Yeah, we plan on playing out about once a month. A steady stream of gigs coming.

CM: Is there a website you guys wanna plug where we can get up to date news on gigs and get some merch?

MM: We also have a Bandcamp page where you can check out some of our live shit. We're probably gonna put some stuff up from tonight's show.

CM: That sounds great. Thanks again for talking with Critical Mass guys. I really do appreciate it.