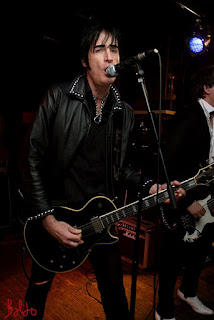 Critical Mass: Thanks for taking the time to talk with Critical Mass, Sonny. I've been a fan for more years than I can count and this interview is greatly appreciated. I know you're heading out on tour in a couple of days, and hitting stops in Europe as well as the U.S. until June. Will we be seeing more shows after this particular run of gigs?

SV: Yeah Chris- I am nearly packed and out the door.. so I will have to make brief answers to your questions with less ground breaking concepts and philosophical insights than usual. As far as touring I will probably keep it to a minimum. The tour we are about to do has some long ‘hell drives’ and that can be fun but also boring….everyone goes a little bit insane on those drives.

CM: The band on this tour is billed as Sonny Vincent and the Bad Reaction. Can you tell us who's playing with you this time around?

And how did you get together with the band?


SV: The Drummer is  Luis ‘Weege’, he plays with a number of people in Los Angeles, most notably the band called ‘Sorrows’ who were also playing Max’s and CBGB along with my band ‘Testors’ back in the day. Luis is too young to have been in the original line up of the  Sorrows, but when I saw him play a yard party in California last year, I knew he was the man for this tour. Lot’s of fire, passion and ability to crank, smoke, spike and swing. The guitarist is Josh and the bassplayer is Jon, they are from the bands Carbona’s, ExHumans and Beat, Beat, Beat.. Again young guys with dedication, passion, fire and hell bent to rise above all bullshit in order to live deep in the music. Also they also like to have some fun, just like me. I met them all through contacts in Atlanta (Warren) and L.A (Joey Pinter). 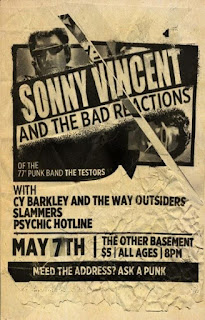 CM: Your last release, Bizarro Hymns, came out last year. Will we be seeing a new album with The Bad Reaction in the coming months?

CM: For those who may not know, you were part of the original New York punk scene on the mid 70's with your old band The Testors. You played now legendary places like CBGB's and Max's Kansas City. What was it like playing in NYC in that era, when punk rock was a lot more primitive and dangerous?


SV: We all felt like we were at the edge of the world , gazing over that edge and seeing a pile shit that had been created by conservatives, nazi’s, and disco music. We intended to disrupt the process that was in place to kill rock n roll . We disrupted it!  We did it!!! And tore stuff up in the process!  The legacy of Jerry Lee Lewis found it’s way into the left nut of Lux and the right nut of John Lydon. The rest is history I guess, and probably the best is yet to come considering the times.
No time to go too deeply into it. As far as telling in detail what it was like. It was an inspired moment in time. The music was blasting from the clubs and just walking around in our self made clothes was intense. The people didn’t know what to make of us. It seemed very, very threatening to them. Anyway it really was over the top and wild a lot of the times. The music got its raw edge back and we were walking around in outfits that pissed everyone off. Sort of like the 50’s part 2.. in terms of the public reaction. There definitely was a primitive, raw and dangerous vibe that scared some people and attracted others. 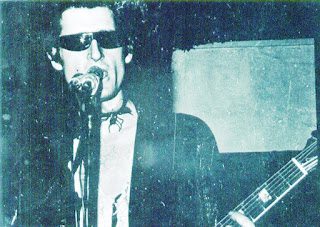 CM: Will there ever be a full on Testors reunion?


SV: We did the two shows last year, one in NYC and one in Atlanta. But I’m not sure if we could do much more than that. Maybe another show or two sometime. Who knows? It was fun but it took a lot to get them together.

CM: You've played along side Scott Asheton (Stooges), Cheetah Chrome (Dead Boys), Wayne Kramer (MC5), Bob Stinson (Replacements) and Greg Ginn (Black Flag) among so many others. All of them are musical influnce's on today's music scene. Who are some of your personal musical influences?


SV: Some of my faves to play with were-Tony Fate, Speedo, Andy, Mario (the RFTC boys’) Certainly Scott Asheton. And forever Bobby Stinson. Also my line up from Hannover was a pisser.Talk about tearing it up! But you didn’t ask that… anyway I decided to mention that since I saw a list of names.
But my music influences are I suppose diverse. I like anything that is pure, wild, fun or deep. 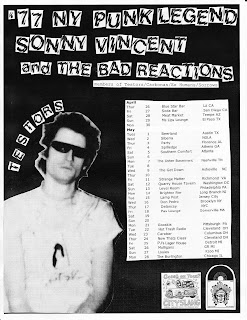 CM: You've pretty much kept busy your entire career. Where are some of your favorite places to play live and why?

SV: I don’t have any real ‘favorite’ places to play. I only think of what is the experience onstage. This is all I see and all I care about. I would rather do a brilliant show in a dump than a bad show with a stupid soundman in a luxurious casino.
Although it is very nice to see all the places and meet lovely people.
Paris, Zagreb, London, Zurich, Madrid… it’s a long list.
Mostly having a good sound is important to me.

CM: Is there a website you wanna plug where fans can get your complete tour dates, up to date news on releases, and get some merch?


SV: sonnyvincent.com has the merch and  photos, bio, etc. And my friend Steve in NYC created the ‘official’ Facebook page where I am an administrator. I am in there for now during the infancy of the page but later it will be Steve’s job!

CM: I can't thank you enough for talking with Critical Mass, Sonny. To say I'm stoked for your gig in Chicago on May 28th would be putting it mildly. Have a great tour and we'll be seeing you in Chicago next month! Thanks again Sonny.

SV: Hey that will be the last date on the tour, guess we will know the songs by then!!!

Posted by Critical Mass at 8:38 AM