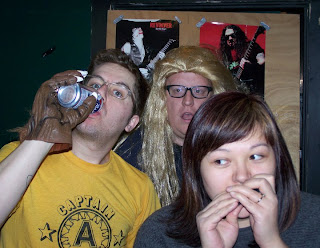 
Critical Mass: Thanks for taking the time to talk with Critical Mass. Can you give us a little history on the band? How did you get started?


Mariah: We formed in Nov 2009 with the original line up. Currently we have Paul on vocals and guitar, myself on bass and vocals and Brandon on drums and vocals. Paul and I were in a band prior to this. I have known Brandon since 1999.


Brandon: I was in a gangster rap group called Knumbnutz.


Paul: I played drums in the first line up and our buddy Joe sang. I joined as a temp until Mariah could find a drummer but had so much fun I had to stay. One thing led to another and I am now up front and Brandon is kickin it on drums.

CM: How did the band come up with the name The Larroquettes? Did you guy's watch a lot of Night Court back in the day?


Mariah: I watched Night Court and The John Larroquettes show as a kid. I thought it was funny to have a fancy name for a loud garage band.


Paul: Funny how many people ask us what a Larroe Kwet is. Brandon has a shrine made for Vicki in his bathroom.
CM: I love the fuzzed out garage sound the band has. Who are some of you influences?

CM: The bands new album is available for download at Suicide By Suit Records website. Will this album, and your other releases, be available in CD or vinyl formats at your live shows?


Paul: The CD is actually called Quartet Loser and yes we got the CDs this week which will be for sale at our shows. The CD has an extra song on it which is not available on the site download. As far as the other recordings we made, that was all shit we did just to do and have for folks to listen to. Thinking about doing vinyl but may save that for the next LP. Everything will be at suicidebysuit.com
CM: The bands has quite a few releases so far for such a new band. Are there any plans for another release in 2011?


Paul: Probably a full length, a split and other odds and ends before the end of the year. I wanna coat the earth with Larroquettes recordings. Our space doubles as a recording studio which helps matters.


Brandon: I have plans for a solo album. I like Kiss. I'll name it Brandon.
CM: With such a wall of sound and screaming guitars coming at you from all angles, is the bands live show as chaotic as the records sound?


Paul: As much as my fat ass will allow. The live show is like a swift kick in the fucking ass. I want people to walk away exhausted, like they just had the heaviest fuck sex of their lives.

Mariah: Check out the You Tube videos. Decide for yourself.
CM:  Are there any shows coming up that you wanna plug?

Paul: thelarroquettes.com or at suicidebysuit.com. Suicide By Suit is a our label btw. We like DIY.

CM: I want to thank the band again for taking the time to talk with Critical Mass. I hope to see and hear more from The Larroquettes in the future. Thanks again.


M, B, and P: THANK YOU! You are cool, keep doing what you are doing!
Paul, Mariah and Brandon - The Larroquettes - thelarroquettes.com

Posted by Critical Mass at 6:29 AM