Interview With Richie Ramone From The Legendary Ramones 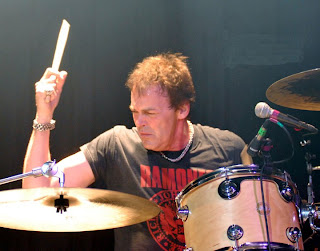 Critical Mass: Thanks for taking the time to talk with Critical Mass, Richie. You played at the annual Joey Ramone Birthday Bash this last May. This wasn't your first time playing the bash. How many have you been a part of?
Richie Ramone: I played the bash 4 times. 2006/2009/2010/2011. It is truly an amazing night!
CM: You played on some of the greatest 80's Ramones albums including my personal favorite, "Too Tough To Die". You also wrote some well known songs like "Human Kind", "Somebody Put Something In My Drink" and "Can't Say Anything Nice" which you also sang. You really WERE a major force behind those albums/songs. What are some of you fondest memories of those days in the Ramones?
RR: Well being a kid and landing my first national act was pretty cool. Not bad for The Ramones to be your first major band huh! Hanging out with Joey everyday for 5 years was a blast. Dee Dee and Joey were very close friends to me and I miss them a lot. There are so many memories maybe I should write a book now. LOL!
CM: Besides being a powerhouse punk drummer, you're also a lover of jazz. How old were you when you first started playing the drums and who are your personal musical influences?
RR: I was four years old when my parents bought me a drum set. I started taking lessons at age five and learned how to read music and also play with an unmatched grip. My too influences are John Bonham and Buddy Rich.
CM: In '07 you debut your "Suite For Drums" including an appearance with the Pasadena Pops. Was it exciting showcasing your jazz playing skills?
RR: Very exciting! It is totally different playing as a soloist with an orchestra than a rock show. You have to keep 80 people steady and on the mark with the help of the conductor. The crowds are a little older but they really enjoyed my arrangement  because it bought back the drum God era of the fifties.

CM: Do you find it just as exciting and satisfying playing jazz as it is to play punk and rock?
RR:I love all kinds of music as long as it is good. With jazz, you get to get off the normal 2/4 beat and play in different time signatures. You can express yourself a bit more than rock.
CM: You're currently working on an EPs of new recordings of your classic Ramones tunes as well as a new song. How is the recording process coming along? And how soon before the album hits the streets?
RR: It will be a 5 song EP and will be available online only. That seems to be the way all the kids get their music today. I am hoping for a release later this year.
CM: Will you be touring behind the new release when it comes out?
RR: Yes! Can't wait to see all my fans again.
CM: I heard you were going to be featured on the up coming second Joey Ramone solo album. Is that true? Can you elaborate on your contributions?
RR: I played on 5 songs and recorded them last year in NYC. There are a couple different drummers on the record so I picked the ones that I liked the best. Bun E. Carlos from Cheap Trick plays on a couple also. It's great to hear Joey's pure voice again and the record sound awesome.
CM: You have worked with musical legends including Chubby Checker as well as Fred Schneider from the B52's. Can you give us some insight into these collaborations? And how we can find them?
RR: I produced a few songs for Chubby Checker that were never released. I could not pass the opportunity to work with the legend. The song I wrote for Fred Schneider is called "Orbit" and is on his first solo album.
CM: We're half way through 2011. What's on the docket for Richie Ramone in the second half of the year? Any big plans that you can share with us?
RR: First of all, you are going to see a lot more of me. I will tour, release my record and collaborate with other artists. I am finishing up my own state of the art private studio where I can record and write. I have many ideas up my sleeve but want to keep a few of them as a surprise.
CM: I want to thank you again for talking with Critical Mass Richie. It truly is an honor on my behalf. I'm looking forward to hearing your new EP and hope to get you to Chicago for a show in the near future. Thanks again.
RR: It was great speaking with you also.  Peace....Richie
Posted by Critical Mass at 7:56 AM