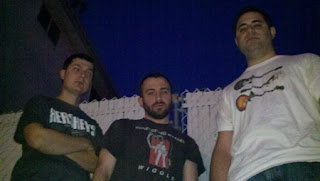 Critical Mass: Thanks for taking the time to talk with Critical Mass. For those new to Goin' Places, can you give us some history on how the band got started?

Victor: "We were hanging out in my basement and started writing songs"

Richie: "We started to jam in our downtime and write songs that we're intended to be jokes - we decided to demo these songs and people took interest in them.  The rest is history."

CM: Your newest release, "Relationship Sneakers", just came out and it's amazing and I know it's been a while since you guys released an album. Was it easy to come up with the songs for this album after being away for so long?

Richie: "It was very easy because most of the songs on 'Relationship Sneakers' were written around the time we made our first album.  Only two songs were written recently - Be With Me (2007/2008) and Bedroom Window (2008)."

Frank: "A few of the songs on the new album were originally written and demoed back in October of 2000.  Other then the two songs Richie mentioned all the songs on the album have been around since at least 2003, if not earlier. We've been wanting to record the album for years, but it kept getting delayed for one reason or another. It's nice to finally get it done."


CM: Speaking of being away, you guys last released an album back in the early 2000's before taking some time off. What were you guys up to between the last album and "Relationship Sneakers"? Was there any bands that were spawned from Goin' Places that released any material?
Richie: "We were all working full-time jobs.  Two of us got married.  One of us had children.  There weren't any bands that spawned from Goin' Places but I recorded an album with my first band, Yellow Teeth.  Its called "Polyrockisim" - 16 pop punk songs."

Frank: "We made a short film in 2002 called 'A Goin' Places Tale'.  After spending most of 2008 filming two more short films we decided it was finally time to record the follow up album we'd been planning for years." 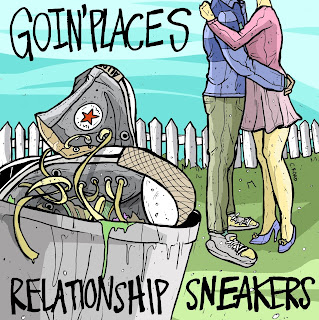 CM: With your last album you had Mass Giorgini helping out and Joe Queer playing on it as well. Has Joe or Mass reached out to you guys since getting back together?

Richie: "We saw Joe recently at a Queers show.  We haven't seen Mass in a while - we need to catch up sometime."

Frank: "Last I heard Mass was still recording at the studio, but he had also gotten a job as a college professor.  Also, even though it seems like we are getting back together for this new album we never actually broke up.  Over the years since our first album we've been playing shows every once in a while and even recorded an album of Beatles covers."

CM: I know this is a silly question, but who are some of the bands musical influences?

Frank: "Individually we each listen to all kinds of stuff...but as far as influences that end up in our songwriting, anything that is simple and melodic is usually the stuff we all agree on."

CM: When it comes to the whole songwriting process is it a group effort or is there a primary songwriter?

Richie: "It depends on the song - we don't have set rules for this."

Victor: "We have used both methods.  There have been times when we all sit together and write something and there are other times when each of us have brought in a song that we wrote and tried it as a band to see if we like it."

CM: Do you guys play out a lot in your area?

Richie: "No.  Nobody gives a shit about us."

Victor: "No longer. There was a time when we played every week, now we are lucky if we play once a year."

CM: I honestly feel that this new album is a REALLY strong effort. Are there any plans on taking the show on the road for some shows? Maybe get out to Chicago at some point? 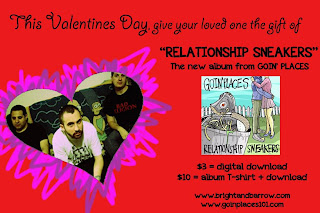 Richie: "Thank you.  If we can get on some good shows - maybe.  It depends on a lot of things."

Frank: "I don't think we're going to be jumping in a van and driving around the country playing shows anytime soon.  But we will happily make our way out to Chicago if we can get on a show as an opener for Screeching Weasel next time they play Reggies or something like that."

Victor: "If there was a demand we are open to playing a few shows."

CM: How can fans get in touch with the band? Is there a website you guys wanna plug?

CM: Thanks again for taking the time to talk with Critical Mass. I love the new album and can't say enough great things about your guys. Stoked to get you to Chicago for some shows in the near future. Thanks again guys.

Frank: "Thanks for asking us to do this Chris.  Anyone who likes the new album should keep checking our websites cause we've got come cool stuff coming up.  We'll have a music video for "Nobody Gives A Shit About Us" available soon and we'll also have some of the new songs featured as playable tracks in Rock Band in the coming months."

Posted by Critical Mass at 8:02 AM