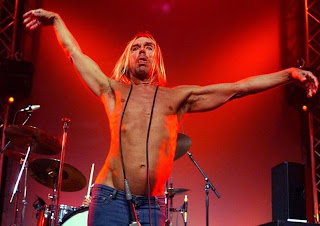 Iggy Pop, the "Godfather of punk", had to cancel 4 upcoming West Coast gigs with his band The Stooges after breaking 2 bones in his foot during a Stooges show in Romania on August 27. According to the bands Facebook page Iggy is quoted as saying "I hate this, I hate like hell to cancel or postpone anything, I only saw the doctor because it hurt so fucking much and I couldn't fix it myself. Please be patient, I am so excited about these dates on the left coast."

The shows in question, 1 in Vegas and 3 in San Francisco have been rescheduled  and can be found HERE. 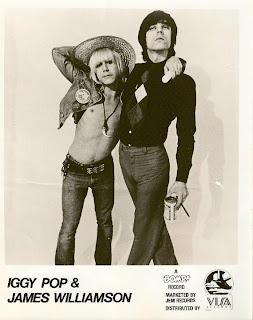 Now onto Iggy Pop music news. According to the new issue of Rolling Stones Magazine, on newsstands now, Iggy and returning "Raw Power" era Stooges guitarist James Williamson have begun writing new material for a possible album. No word yet on if the album will be an Iggy solo record or a Stooges album. This is the first time that Iggy and Williamson have written material together since 1979's "New Values" album. Iggy said "This spring, James came to my place in Miami and we wrote about 10 songs. I think we like about half of them." One song called "Requiem For A Heavyweight" is a tribute to original Stooges guitarist Ron Asheton who passed away in '09. Iggy and Williamson performed the acoustic number at an Asheton tribute concert this past April in Ann Arbor, MI. Iggy goes on to say "We're gonna keep writing. I think that James would like to make an album, and I'd like to make the score for intelligent video game or something-so as far as what the format might be, I don't know."
Posted by Critical Mass at 6:50 AM