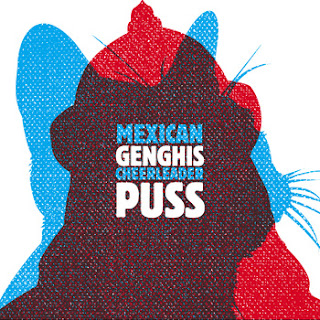 When I think of all the great bands to come out of Chicago I usually think of Naked Raygun, Bollweevils, Screeching Weasel, Effigies and The Methadones. Now I'm adding Mexican Cheerleader to the top 5...make that top 6!

Their new album "Genghis Puss", out now on Underground Communique Records, is a true fucking rocker in every way possible. It's catchy, loud, funny and awesome! Who else could write a song like "You Owe It To Charo" with a straight face? Nobody, that's who!

"Genghis Puss" is the bands first album in 5 years, and it's well worth the wait. The bands comedic genius is still intact. Songs like "Parking Lot" and "Hole In Your Head/Heart" are true punk anthems with great riffs and lyrics. "You joke but no one's laughing. Your soul devoid of  action. You're sweating beads like oysters, pure chewing satisfaction." Pure poetry!

Antagonistic cocky fun is on tap, and I'm drunk on it! I can't get enough of this album, and neither should you. "(There's A) Crowd In The Crowd" is a fast little number, with a tip of the hat to Deep Purple's "Highway Star", that sounds like it could be about YOUR local music scene. A scene full of assholes who are just there because they think it's "cool" to be part of the "crowd". You gotta hear it to believe it.

Another song about the phony punk rock bandwagon jumpers is "I'm A Mess". Nothing more true then the lyrics "Revolution canceled on account of stormy weather. The mohawk and the safety pin, the new suit and tie." Sad but true folks! Sure, there's a bunch of phony dicks out there that call themselves "punks", but as long as we have bands like Mexican Cheerleader pointing them out in the crowd, our little scene will still thrive.

Now, onto the BEST cover of an obscure 80's tune ever. The band whip through Gleaming Spires semi hit "Sex Girls" like it's 1984 all over again. Hands down the best cover I've heard in years! You may remember this song from the cult 80's geek fest film "Revenge Of The Nerds".

I can't say enough good stuff about this album. It's a fun record, and not one that loses it's appeal after a couple listens. This is a true classic! But this record NOW! Or go by the new crappy Blink 182 album. The choice is yours. You can download the album for FREE here. Now do the right thing, and listen to this album. There's no real reason NOT to!

Posted by Critical Mass at 4:49 PM