"My Personal Top 10" - Darren Vorel From The Scissors

Here at Critical Mass, I'm starting a new column called "My Personal Top 10" written by featured artists who have been affiliated with CM in one way or another. This will be a weekly feature every Friday. "My Personal Top 10" is just that. It's an inside look at what influences artists. Where the artist of the week can share a little something about themselves. What drives them and inspires them to be creative. My first artist is a personal friend of mine, a talented singer, songwriter, guitarist and an all around great guy...not to mention the first person I ever interviewed. From The Scissors, Mr. Darren Vorel. 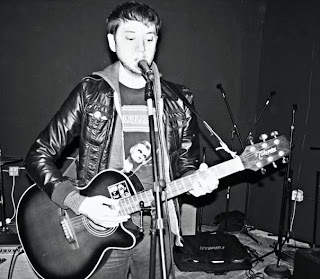 My Personal Top Ten: Darren Vorel
10. Sushi Station in Rolling Meadows, IL. - The sushi rolls around on a huge conveyor belt that spans the whole restaurant. It’s my lady’s favorite spot, which kinda makes it my favorite spot. Always crowded so you know it’s good and the food’s cheap which is a bonus. They also have Kirin Ichiban on tap. The bus boy that’s been there for the last 3 years looks exactly like the lead singer from the band, Bayside. I swear it’s him.
http://www.sushistation.us/english/
9. HBO Original Series – I don’t have enough bread to afford HBO, but I do have Netflix. That’s really opened the door for me to catch up on this stuff. First series I watched was “Six Feet Under” back in ’06 or ’07. It’s got an incredible cast and Alan Ball is one hell of a genius.  I’d say it’s my favorite series, but I also loved “Deadwood,”  “John Adams”, “OZ”, and “True Blood.” Interested to see “Boardwalk Empire” but haven’t had the opportunity yet. TV in general has been pretty excellent in the last few years, with shows like “LOST”, “24”, “Dexter”, and “Always Sunny” as some notable leaders. http://www.hbo.com
8. My Cat – I think he fits in right around here. Never really named him. Over the years “Kitty”, “Guacho”, and “Tito” have suited him. Bitches at the door to go outside every chance he can. He even loses his voice doing it. Totally tempermental and a one of a kind loner with the worst attitude you’ve ever seen on an animal or human. Every now and again he’ll come hang out while I’m writing, or watching a movie. He’s my best friend of like 16 years or so. Probably ‘cause we’re earily similar. Been through it all together and i’m lucky to have him. http://instagr.am/p/D_poI/
7. Film Noir – Movies like “Detour”, “Woman In The Window”, “The Third Man” and Billy Wilder’s “ Double Indemnity” to name a few. What’s not to like? Guys getting caught up in some maniacal plan cause they fell for some shady lady with a cigarette attached to her mouth for 2 hours or so.  We’ve all been there right?
http://en.wikipedia.org/wiki/Film_noir
6. Sam Cooke Live at The Harlem Square Club – Let’s face it. Live albums are mostly terrible. These days a “live album” consists of 10% live performance and 90% studio overdubs. Not this one. In fact, it might be the best record anyone’s ever made. Listen to Sam tirelessly working the crowd with a voice that’s straight outta the gospel choir…with a little grit from his soul to make you move. His intro to “Bring It On Home To Me” gives me goose bumps every time. “I said I don’t want you operator….I want my BAAAAAAABBYY!” You really, really, have to hear this. It’s a must for anyone who likes genuine real deal no fucking around music.
http://www.youtube.com/watch?v=jkLZ_pVwU3k
5. Wrigley Field, Chicago – If you’ve been to Wrigley then you can understand. There’s nothing like walking into that place on a summer day in July, having an Oldstyle and watching the best damn team in baseball. I got to see Sosa hit #61 and #62 with Mark McGwire and The Cardinals in the stadium. That day was pretty damn magical.
http://chicago.cubs.mlb.com/chc/ballpark/index.jsp
4. Dick Biondi and any radio station that’s lucky enough to have him. – Dick is a serious legend. I’ve lived in Illinois all my life and I don’t know what Chicago radio is without Dick Biondi. My dad used to crank up Oldies 104.3 when we’d go for a drive and we’d sing along to the songs he’d play...all the hits, all the time. He KNOWS music and he’s a great guy on and off the air. A voice that is as recognizable as Elvis Presley’s. Long live Dick Biondi and the great memories he’s given us! http://en.wikipedia.org/wiki/Dick_Biondi
3. Vertigo (1958) – My favorite movie of all time. James Stewart and Kim Novak star in Hitchcock’s most personal film. I’ve seen it about 40 times to date. To me, it’s got everything you’d want in a feature. Drama, suspense, lust, love, detectives, ghosts, cigarettes, booze, mystery, costumes by Edith Head, and a pretty damn haunting score by Bernard Hermann. It’s the first movie that made me look at film as an art form, as well as entertainment. http://en.wikipedia.org/wiki/Vertigo_(film)
2. The Ramones – I’m aware that liking The Ramones is a bit cliché these days in the punk rock community. I don’t care. That doesn’t change the fact that this band is my favorite band of all time. How does someone really get into the Ramones? Well, I got to see them perform live. I heard a few of their songs before the show and thought, “this is terrible.” I remember hearing “Beat On The Brat” and “Blitzkrieg Bop” and really trying hard to understand what the guy was saying.  I got the ticket as a birthday present from my brother’s friend Rob. Walking into the Riviera, you could hear people chanting “Hey Ho Let’s Go” from the doorway. It was Magical and Life Changing. Even in ’96, at the end of their time…still put on one of the best live shows ever. Saw ‘em two more times after that. Even caught one of Johnny’s pics which has dirt on it from his Mosrite. One of my prize possessions. Through them I got into bands like The Clash, Screeching Weasel, The Queers and Mr. T. Experience. Then I started my own group.
http://www.youtube.com/watch?v=E5Ql6tOPM90
1.  Playing in a band – ‘Cause you gotta do what you love while the good lord allows it. 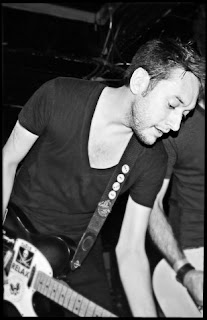 Posted by Critical Mass at 2:36 PM