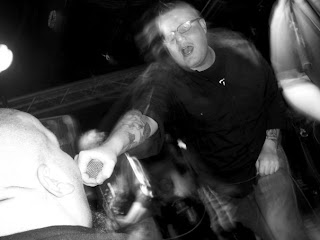 Critical Mass: Happy New Year and thanks for taking the time to talk with Critical Mass, Shawn. For anyone who may be new to Refuse Resist, can you give us a little history on your band? How long have you guys been together?
Shawn Refuse: Sure, we have been around since 2007. Mike and John jammed with their friend Nick and had a bunch of cover songs down. I had been out of the music scene for a while so I was looking to get back into it. Searching for a band, I stumbled upon their MySpace (yes myspace) ad. Rented a car and went to tryout. I came from work so I was slightly dressed up and they kinda thought I was a tool. I thought they were rough but had the same ideas that I did. Bring back an old-school sound that was more like 80's hardcore punk instead of chugga chugga music.
Since then we have been through a bunch of bass players. Our current one is long time friend of the band Jamie Payette from Yesterday's Heroes. Two years ago we also added Steve Risteen on rhythm guitar.
CM: With your hometown of Boston having such a rich history of hardcore bands such as Jerry's Kids, S.S. Decontrol and Negative FX among so many others. Who are some of your personal musical influences and how do you feel those influences come across in your music?
SR: Those three are up there. We actually covered Boiling Point with Springa on vocals at the DYS reunion show August 2010. Then recorded it with the original bass player Jaime Sciarappa which is supposed to be coming out in Europe some day. We shall see.
I think the band will also say Black Flag, Minor Threat, Misfits, Bad Brains, etc as well. Really though lately we just write and whatever comes out is what we are. If it's punk, cool. If it's hardcore, cool. If it's rock, cool. We all listen to a lot of different music and genres. So, the last album "Socialized" has some songs with more of a rock beat to them, but we are always on the harder side. More so because I sing the way I do. It's just my voice, ha. And listening to too much Sheer Terror, Kill Your Idols, The Virus and Slapshot growing up. Dead Kennedy's were also the band that drew me to punk in the first place so sometimes you will see a little of that sneak in as well.

CM: Do you feel the Boston hardcore scene has been revived in recent years with bands like Dropkick Murphys and Street Dogs rise in popularity?

SR: I think they have definitely put Boston back into the view of the world, but they are really good rock bands that came from the hardcore scene. I love when they have bands like Sick Of It All and H20 play their shows though, it shows that they are still into good Hardcore/Punk and get the kids out there to see them when they may not have otherwise.
As far as the local scene there are always a bunch of good bands playing in Boston. We are lucky that there is so much talent up here. The shows can go either way but it seems like it is that way all over the country. I know we do better when we play in different states. I love Washington DC and Florida. They have been good to us there on the last tour and it was our first time at those places.
CM: The bands last album "Socialized" came out a couple years back. Are there any plans on releasing new material in 2012?
SR: We have had a rough 2011. Our drummer has been in and out of surgery and we really haven't had the time to write after teaching a few different bass players as well.
2012 we hope will bring new material and more shows out of state. It's hard for any band right now in todays economy. BUT when we do write I can tell you it will be vinyl and possibly a couple splits. We'd love to do a few splits with bands around the country so we can introduce them to the Mass crowd and we could get out the their areas as well. 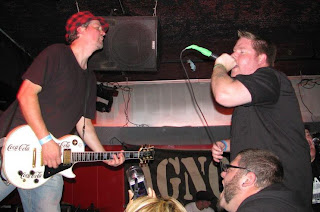 CM: Since the release of your last album you guys have added Steve Risteen from Slapshot on second guitar. how did Steve come about joining the band?

SR: Well, we had been looking for a second guitar for a while at that point. A friend of mine in the Sprained Ankles was friends with Steve. He asked me to cover a song with them and that Steve would play guitar. I know I get compared to Choke all the time, so I was like "sure why not embrace it" and we did the cover at a little place called All Asia.
We met there and it was a fun time. Next time I saw him was at a screening of the Slapshot movie "Chip On My Shoulder" but that was just in passing.
Later that year we played a show with Murphy's Law in Providence. We asked Steve to cover "No Friend of Mine" with us there and he got the bug.
I asked him a few times to join and he finally did. He has quickly become one of my best friends. He really is one of the best people you will ever meet.
CM: When it comes to songwriting, is it a group effort or is there a primary songwriter in the group?

SR: We write a lot as a group. We are coming up with a new dynamic because of the new members. But the band writes the music and I write the words. On occasion I will write a bass line or two or come up with a chorus and have them write under it. It's pretty all over the place.
Mike and John have a pretty symbiotic relationship though. They play really well together when jamming and writing. 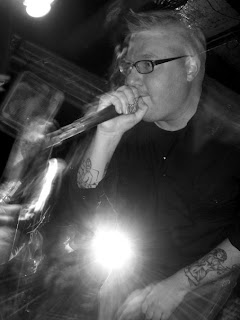 CM: You guys have shared the stage with bands like The casualties, Lower Class Brats and The Business. Pretty impressive in it's own right. Whats it like playing with so many great bands?
They are just bands. Sometimes they bring a lot of people in and it's amazing, sometimes there are prima donnas, but more times than not, it is a good time.

CM:Has the band ever been approached by bands to go ,out on tour or gone out on tours of your own?


SR: Nope. No bands have approached us yet. I would love to do nothing but tour but our jobs make it tough. We did an East/Gulf tour Feb 11 and it was great. Lots of fun and new friends along the way.
CM:What can we expect from Refuse Resist in 2012? 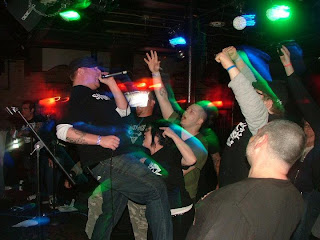 SR: The future is unclear at the moment as our drummer is going back in for surgery in Feb. BUT we do have a couple fill-ins for the dates we have booked. So we will keep on rolling. Like I said earlier we'd like to do some vinyl releases and splits. And, I would like to tour more as well. We shall see.
CM:Is there a website you wanna plug where fans can get up to date news on upcoming releases, shows and merch?
SR: Our site is refuseresistband.com but we don't keep it up to date too often. Our Facebook is where we update the most and soon we will have our first CD for free download at refuseresist.bandcamp.com
CM: Thanks again for talking with Critical Mass, Shawn. I wanna wish you guys all the best in the new year and I hope we can get you guys to Chicago for some shows soon. Thanks again man.

SR: Last time we played near Chicago, we played to one Mexican punk with a pitcher of beer. It turned out to be a lot of fun, but next time we will be sure to make it into city limits. ha.
Posted by Critical Mass at 8:37 AM