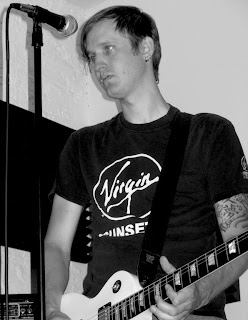 Critical Mass: Thanks for taking the time to talk with Critical Mass, Adam. For everyone new to Lights Alive, can you give us a little background on the band? Who's in the band and how did you get together?
Adam Instefjord: The band is Devon Carson on vocals, Dave Vazzano on drums, Min Ko on guitar, Chris Olsen on bass and myself on guitar and backing vocals.  Dave and I have known each other for some 17-18 odd years.  We got really into 90s punk music like Green Day, The Offspring, Blink 182, etc.  Dave was already a drummer in school marching band, so I picked up the guitar and we started playing all of our favorite tunes and attempting to write a few of our own.  We kept at it all through our high school and college years and eventually moved out to Los Angeles in 2004.  While we were gigging out there, we met Devon at a bar, who was born and raised in Las Vegas and was out in LA acting in theater and film. She became a big fan of our band and signed our mailing list with her phone number, so I called and asked her out.  We’ve been together ever since.  In 2008, Devon, Dave and I moved back to the Chicago area and we soon joined the 90s cover band 90’s Nation.  This was the first time Devon was in a band, and after realizing that she has some pipes, we forced her to sing in this band too!  Min was shredding guitar solos in the cover band and since we connected on many things such as our fondness for Guinness and nerdy video games, we recruited him to play with our original band.  After a long search for bass players, Chris came in to audition and nailed it.  He also secretly bribed us with lots of whiskey and beer. 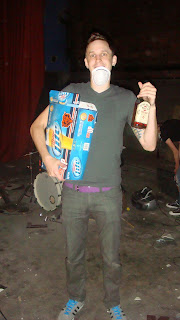 Chris Olson, guilty as charged
CM: I've been listening to the bands songs on your Facebook page, and your music is orchestral and layered. Very well arranged in its sound and texture. Do you record and produce your own music?
AI: Thanks!  Yes, right now we record and produce everything completely on our own.  I went to school for audio engineering basically for that exact reason.  I’m obsessed with recording, mixing and producing.  It works out great because it allows us to work on quality recordings without the time deadlines and financial limitations of paying for studio time.  I grew up listening to a lot of fairly simple, straightforward recordings, but I’ve grown to love good production and layers and really achieving the best possible and most creative sound we can get.  In the future, though, we would love to work w/ great producers in great studios!  I am sad I will never get to work with my all-time favorite producer, Jerry Finn, R.I.P.
CM: Besides your own original tracks, the band also has a couple of covers, the Flaming Lips song "Do You Realize" being a personal favorite of mine. Was it an obvious choice to cover the Lips as well as Coldplay, 2 bands who also have very orchestral and textured songs?
AI: We did “Do You Realize” on the 10th anniversary of 9/11 as a tribute.  It’s just such a beautiful song about appreciating every moment of life.  For that song, we kind of stripped away the orchestration and layers of the song and just did a simple version with an acoustic guitar and vocals.  With “Fix You” by Coldplay we took their more subdued piano and organ layers and changed it into our big, anthemic sound with delayed guitars and synth.  I would say with both of the songs, the choice came partly from the similarities in musical textures, but it was mostly the lyrical content that we connected with.  We try to write pretty positive and uplifting music, so that’s where the desire to cover those two songs came from.  You can hear both covers at YouTube. 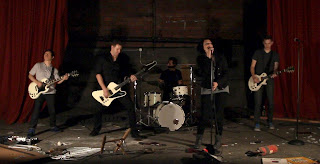 CM: Who are some of the bands musical influences? And how do those influences come across in your own material?
AI: All five of us have our own separate influences, but the ones that really come across in our songs most are probably Angels and Airwaves, Jimmy Eat World and Paramore.  Angels and Airwaves took that U2 “The Edge” guitar sound, which I fell in love with, and blended it with pop-punk music.  Jimmy Eat world writes amazing melodies and great lyrics.  Paramore is a little more pop-punk than our stuff, but their album “Brand New Eyes” was actually pretty deep and mature, and full of amazing melodies.  And there’s the whole female fronted thing too!  Some other bands that influence me are Alkaline Trio, Unwritten Law, New Found Glory, Coldplay, The Used, Green Day, Blink 182, Weezer… the list goes on.  One somewhat unique influence I have (don’t mind my inner nerd here) is music from video games.  Especially games with big orchestral scores, like the Final Fantasy series *cough, nerd, cough*.  My favorite composers are Nobuo Uematsu and Yasunori Mitsuda.
CM: Do you all take part in writing lyrics and music? Or is there a mastermind behind your songs and style?
AI: The way it has been working so far is that I will write and compose most of the music and send it to everyone, then everyone kind of takes their parts and puts their own spin on it.  We bring it to practice, hammer it out and make little changes until we have what we want.  Then months later I’ll annoy everyone and change a little part or change the key of the song!  Lyrics have all been by Devon or myself.
CM: I understand the band has its very FIRST gig coming up real soon (Nov. 13) at the Volcano Room, which must be very exciting. Are there gonna be more gigs coming by years end?
AI: Yes, we are finally playing our first show!  November 13th at the Volcano Room, with Lakesigns, Torch Singer and Dolphins.  It’s our first show with this band, but we’ve all played many shows in other bands, so we’ll be ready to rock hard!  We hope to play a few more shows before we get to 2012.  We’re looking forward to getting out into the Chicago scene and meeting people and other bands.  Hopefully people will enjoy what we do! 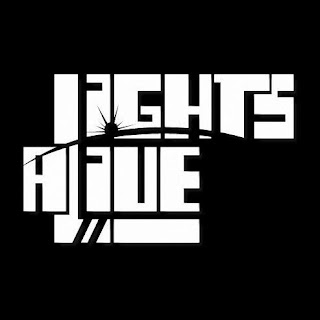 CM: Adam, you recently told me that the bands working on a music video. Can you share any info on what song and when we may get to see the finished product?
AI: We are shooting a video for our song “The Fight” with an amazing production company from Rockford called Vixen Productions.  They are a very ambitious and talented team of creative people and we’re very happy to be working with them.  We just shot some awesome footage at this crazy abandoned theater that had caved in ceilings and a few dead pigeons on the 2nd floor!  We made them be our “extras.”  We’re currently planning shoot days for the narrative part of the video.
CM: Will we be seeing an EP or an album from Lights Alive in the new year?
AI: We were just discussing this the other day actually.  Since we record on our own, we’ve just been writing and recording as the songs are written.  So I think we’re gonna write a few more and then start working them into an album.  Nowadays, we’re hearing a lot of singles being released on their own, but I still love the idea of full albums that are cohesive and flow from song to song.
CM: Is there a website you guy's wanna plug whee we can get up to date news on gigs, new music, the new video and merch?
AI: The best place to keep in touch and get updates is Facebook .  We’re also on Twitter (@lights_alive).  You can also download some songs for free right now at lightsalive.bandcamp.com
CM: I want to thank you all again for talking with Critical Mass. I'm really impressed with your sound and dedication to your craft. And I think more people will really enjoy hearing and seeing you as well. I'm excited for the video and new music. Thanks again gang.
AI: Thank you for the interview and awesome blog!  And congratulations on the new little guy/gal coming soon! 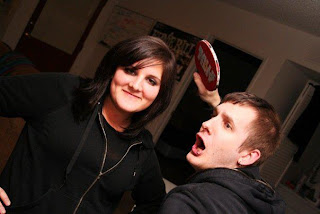 Posted by Critical Mass at 8:38 AM